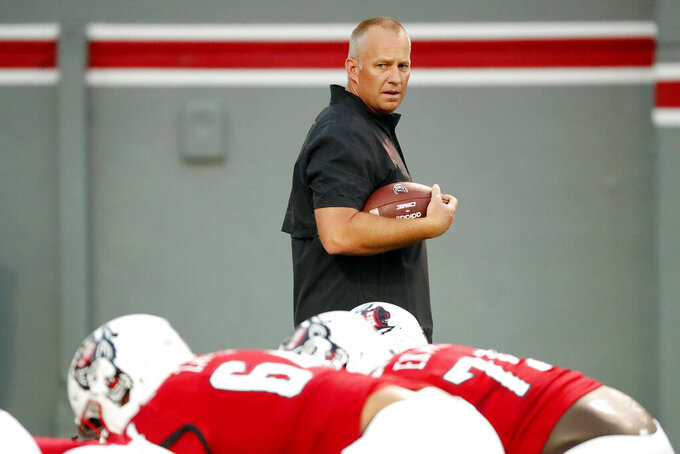 Clemson linebacker James Skalski sees nothing odd about staying in college, no matter how many seasons he's been with the Tigers.

Skalski, 23, is among the group of sixth-year “Super Seniors," who have taken advantage of redshirt rules — and the NCAA allowing athletes to extend their eligibility due to the COVID-19 pandemic last year — to continue their athletic college careers, in some cases, well beyond graduation.

“Yes, some guys were in high school and, yes, (Clemson freshman) Jeremiah Trotter was 13 when I took my first snap,” Skalski said. “That stat is weird to me.”

It's a twist for Power Five leagues, including Atlantic Coast Conference programs. ACC schools have players ranging from their mid-20s to top-prospect teenagers — some who gave up part of their final high school years to get an early jump on college careers.

“It's unique,” North Carolina State coach Dave Doeren said. “And as far as I can tell, it'd be hard to have another year like this.”

Such an age spread can be a blessing or a curse. Newcomers have instant mentors who can lead them to success — or those who expected to play can become despondent and dent team chemistry.

Carter was an All-American defensive lineman at Florida in the early 1990s who played 14 seasons in the NFL. He understands the appeal for older college players accustomed to vital roles wanting to continue.

The problems, Carter said, arise with rising sophomores or juniors who have already worked and sweated three or four years awaiting their shot, but instead find themselves back on the bench.

“There are adverse affects on the team,” he said.

“You see certain guys on the team and they’ve been starting games in college football since dude was a freshman in high school, or in middle school,” he said. “Crazy to think about.”

Coaches have expanded efforts to ensure harmony despite the gap.

Pitt coach Pat Narduzzi, like most head coaches, uses a leadership council of trusted, usually older players, to take the temperature of his team and maintain camaraderie.

He said there's a leader on the council from each position group “in charge of making sure everything sticks together.”

North Carolina coach Mack Brown said flatly, “We have a real divide between old and young.”

Frustrations rise among young players, he said, who often come in with swagger and high school clippings about how good they'll be in college. Then comes training camp, endless film study and college classes.

Brown has told his older players to treat younger teammates like their brothers and “even better than they were treated” when they started school.

Doeren, the Wolfpack coach, said he's got to keep preaching the program's tenets as if everyone in his meeting room is 17.

“I think you have to talk down to the youngest guy in the room all the time,” he said.

Wolfpack offensive lineman Tyrone Riley first arrived on campus — and redshirted — in 2015. Injuries cost him the 2016 and 2017 seasons and he made his first college start in 2018. Three years later, Riley has returned for his seventh season.

“It’s hard not to laugh a little at the new guys who are acting like they are going to die during practice," Riley told The Fayetteville Observer in May. “When you’ve been here as long as me, it all becomes routine."

It's helped with the quick maturation of Clemson starting safety Andrew Mukuba, an 18-year-old who enrolled in January.

Mukuba immediately sought out starter Nolan Turner, a “Super Senior” who'll turn 24 before season's end, to learn absolutely everything on succeeding in college.

Mukuba, Turner recalled, would sit next to him at film study and work alongside him at practices to improve.

“I knew that's what I had to do to help the team,” Mukuba, from Austin, Texas, who is starting next to Turner.

North Carolina State's Doeren accepts some older players may tune him out sometimes after hearing the same speeches for several years. It's the only way, he said, to build a winning program.

“I know there's monotony in that," Doeren said, “but I promise you in NFL locker rooms there's 38-year-old guys hearing the same messages we're talking about."