ACC returns to Brooklyn, not its typically strong self 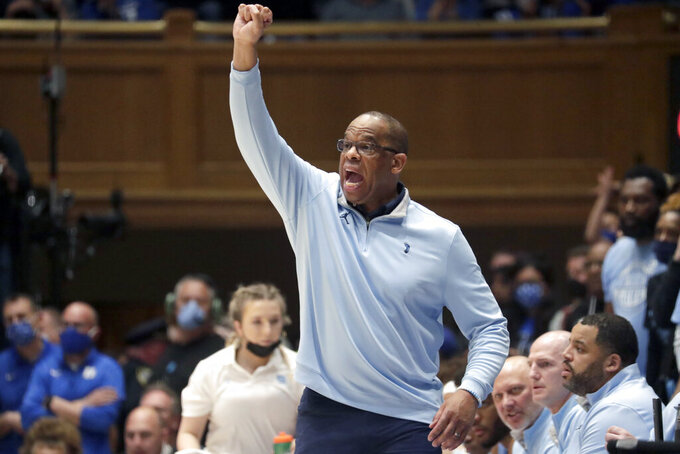 NEW YORK (AP) — The Atlantic Coast Conference returns to Brooklyn this week, not quite the college basketball powerhouse it has historically been.

The ACC Tournament starts Tuesday at Barclays Center, with just two teams ranked in the latest AP Top 25. No. 7 Duke is the top seed heading into the most tradition-rich of the conference tournaments.

The Blue Devils (26-5) will look to give Mike Krzyzewski his 16th championship in the retiring coach's final conference tournament and bolster their case for a No. 1 seed in the NCAA field. Meanwhile, the rest of the ACC's top teams are just trying to make sure they don't end up on the wrong side of the bubble.

“The marathon is now over,” Miami coach Jim Larranaga said this past weekend after the Hurricanes ended the regular season by beating Syracuse. “Now the sprints begin.”

The championship game is Saturday night, the day before Selection Sunday.

The last time an ACC Tournament started with two or fewer ranked teams was 2013.

The ACC was only a nine-school conference then. Since the conference expanded in 2004, the ACC has never had fewer than four teams receive NCAA bids. And since expanding to 15 in 2013-14, six is the fewest NCAA bids the ACC has received.

But this season, everything is going to have to break perfectly in Brooklyn and around the country for the ACC to get more than four schools in the 68-team men's field.

Behind Duke, second-seeded Notre Dame (22-9) enters the ACC Tournament looking safe for an at-large NCAA bid after a surprising regular season in which the Irish won 15 conference games for the first time.

Third-seeded North Carolina (23-8) is coming off its biggest victory of an otherwise inconsistent season, knocking off Duke in Krzyzewski's last home game to slip back into the rankings this week at No. 25. The Tar Heels have won 10 of 12 and finally appear to be a good bet to make the NCAA field.

"We all knew the potential of this team and how good we are,” Tar Heels guard R.J. Davis said. “I think we can build off this win and go far.”

Fourth-seeded Miami (22-9) needed a late rally at Syracuse on Saturday to close the regular season with two straight victories.

“We’re trying to use this momentum we created the last two games and take into the ACC Tournament,” Miami's Jordan Miller said.

Like Miami, fifth-seeded Wake Forest (23-8) was picked to finish in the bottom third of the ACC, but took advantage of down seasons by the likes of Virginia, Louisville, Syracuse and North Carolina State to surge up the standings.

Still, the Demon Deacons and conference player of the year Alondes Williams probably cannot afford a misstep on Wednesday against either Pitt or Boston College if they want to get back to the NCAA Tournament for the first time since 2017.

This will be the third ACC Tournament at the home of the NBA's Nets.

Playing the tournament outside of the state of North Carolina doesn't sit well with lots of ACC fans from its longtime member schools. New York City can feel like a strange fit with the Big East Tournament going on just a few subway stops away at Madison Square Garden in Manhattan.

For some of the newer ACC members who came from the Big East, playing in the Big Apple is a welcome change of pace.

“I'm excited going back to New York,” Brey said. “It’s got the old Big East feel, going back and being in the city. The energy. And they’re playing for a trophy.”

The ACC Tournament has been played in Greensboro, North Carolina, home of the league office — at least for now — 28 times. Charlotte has been the host city 13 times and the first 13 ACC tournaments were played at Reynolds Coliseum in Raleigh.

No coach has won the ACC Tournament more than Krzyzewski.

If Paolo Banchero and the Blue Devils can add to Krzyzewski record it will be the first time since 2006 Duke has finished alone atop the ACC regular-season standings and won the tournament in the same season.

The Blue Devils lost Krzyzewski's final game at Cameron Indoor Stadium, but he reminded everybody there was still a long way to go.

"So many people are saying great things about you and whatever, and you say, ‘It’s not over yet,’” Krzyzewski said.

Wake Forest heads to the tournament with a new extension for second-year coach Steve Forbes. The program announced the deal Monday, the same day the league named Forbes as its ACC coach of the year. Forbes has led the Demon Deacons to their winningest season since the 2008-09 season and has them in contention to make the NCAA Tournament for only the second time since 2010.

“We've come a long ways in a short amount of time,” said Forbes, whose team was picked to finish 13th in the preseason.