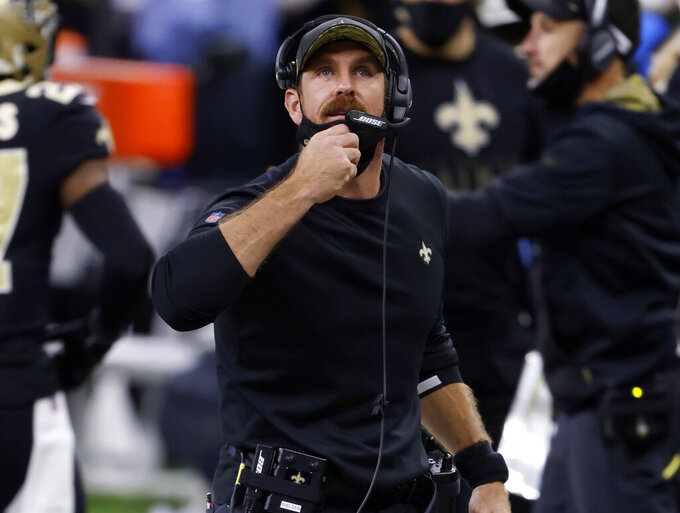 FILE - In this Nov. 22, 2020, file photo, New Orleans Saints defensive line coach Ryan Nielsen looks on during an NFL football game against the Atlanta Falcons in New Orleans. A person familiar with the situation says Nielsen has agreed in principle to become LSU’s next defensive coordinator. The person spoke to The Associated Press on condition of anonymity on Monday, Jan. 18, 2021, because some contractual details were still pending. (AP Photo/Tyler Kaufman, File)

The person spoke to The Associated Press on condition of anonymity on Monday because some contractual details were still pending.

Nielsen is in line to become LSU's third defensive coordinator in three seasons. He replaces Bo Pelini, whose defense struggled in the 2020 season. The Tigers ranked 124th nationally in total defense, allowing 492 yards per game.

Nielsen has been the defensive line coach for all four on the Saints' NFC South-winning squads from 2017 to 2020. He also has history with LSU coach Ed Orgeron, having played at Southern California when Orgeron was a defensive line coach there, and having coached on Orgeron's staff at Mississippi from 2005 to 2007.

At New Orleans, Nielsen oversaw a defensive front that totaled 45 sacks this season, which ranked eighth in the NFL. The Saints averaged nearly 47 sacks during the past four seasons, always ranking in the top eight in the league during that span. The Saints also consistently ranked near the top in run defense, including fourth in 2020.

In 2016, the Wolfpack ranked eighth nationally in yards rushing allowed.