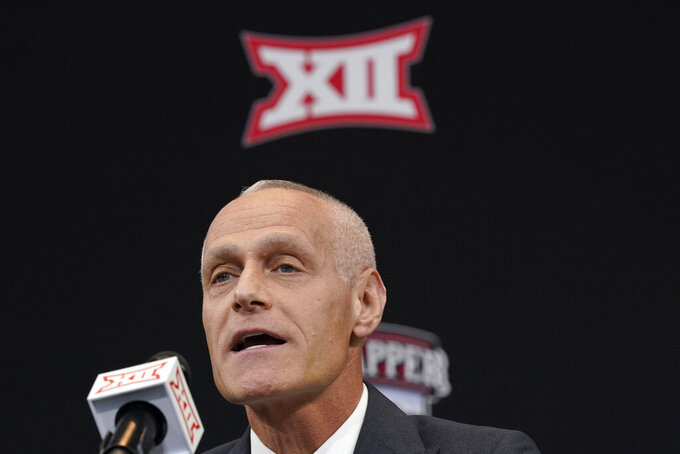 The Big 12 has reached an agreement on a six-year contract extension with ESPN and Fox worth more than $2 billion that will keep the conference's media rights with those networks through the 2030-31 college sports seasons, according to people familiar with the deal.

Two people confirmed details of the new media rights deal to The Associated Press on Sunday, speaking on condition of anonymity because contracts have yet to be finalized and no official announcement was expected soon.

Sports Business Journal was the first to report the deal would be worth $380 million annually. The Big 12 still has two years left on its current deals with Fox and ESPN.

New Big 12 Commissioner Brett Yormark announced in August he was engaging the networks in discussions about an extension and just a few weeks ago said a new deal could be done soon.

The television deal provides stability to a league that a little more than a year ago seemed to be in danger of falling apart. Oklahoma and Texas announced in the summer of 2021 that they intended to leave the Big 12 for the Southeastern Conference at the end of the current TV deal, which expires in 2025.

Former Big 12 Commissioner Bob Bowlsby and the conference moved quickly to add Houston, Cincinnati, Central Florida and BYU. Those four will join next year, giving the Big 12 14 teams for at least one season.

It would cost tens of millions of dollars for Texas and Oklahoma to break current contracts leave the conference early.

Without the Longhorns and Sooners, there were concerns about how much networks would value the the Big 12. The final two years of the current deal pays $220 million annually.