Badgers aim to regain consistency that was missing last year 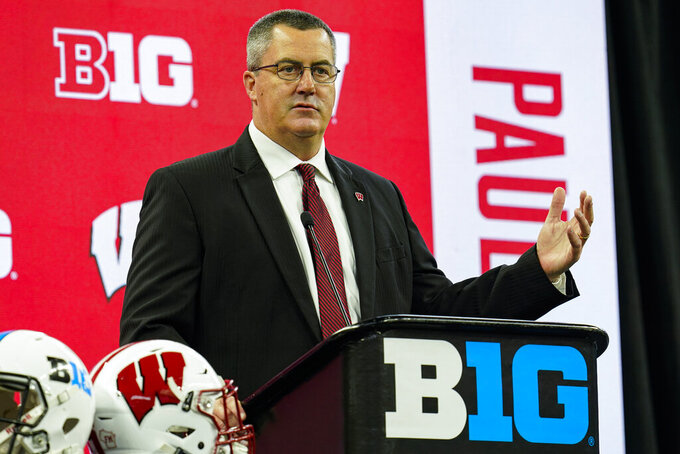 MADISON, Wis. (AP) — Wisconsin coach Paul Chryst discussed the key to quarterback Graham Mertz’s development by utilizing a theme that came up time and time again during a news conference on the state of the Badgers’ program.

“He’s got to be more consistent,” Chryst said Thursday on the eve of Wisconsin's first practice. “You know, I’ll end up saying that about every guy the whole time, but it’s the truth.”

Consistency has pretty much defined Wisconsin’s program for most of the last two decades, but that trait was missing last year as the Badgers went 4-3 in a rollercoaster season.

A COVID-19 outbreak caused Wisconsin to cancel games with Nebraska and Purdue. The Badgers were ranked in the top 10 after opening the season with lopsided victories over Illinois and Michigan, then lost three straight games. The Badgers needed to close the season by beating Minnesota in overtime and winning the Duke’s Mayo Bowl over Wake Forest just to avoid its first losing season since 2001.

That’s a lot of ups and downs for a program accustomed to steadiness. Wisconsin won at least eight games all but one year from 2004-19.

“The culture we’ve tried to instill this offseason is getting back to our roots, like what Coach Chryst has been explaining, and just playing Wisconsin football again,” senior safety Collin Wilder said. “That’s being the most physical team on the field and just gritting your teeth and just going.”

He opened his college career by going 20 of 21 and throwing five touchdown passes in a 45-7 victory over Illinois, setting a school record for single-game completion percentage and tying the program record for TD passes in game.

But after throwing seven touchdown passes without an interception in his first two games, Mertz had five interceptions with one touchdown pass during Wisconsin’s three-game skid. The Badgers scored a total of 20 points during those three games.

Mertz said his improved footwork should make a difference this season. He also has worked to become more consistent off the field.

“My big thing is how can I be consistent in every area of my life, and that’s family, faith, academics and just being in the locker room with the guys and being out here,” Mertz said. “And how can I be consistent in those areas. You can’t let one fall short or then you’re not consistent at all. For me, this offseason was trying to be just more of a balanced player and a person. For me, that’s the key to my growth in this offseason.”

Mertz also garnered some attention this offseason when he unveiled his own personal logo in advance of the rule changes allowing players to profit off their name, image and likeness. Mertz said that won’t take his mind off his primary goal of returning Wisconsin to Big Ten title contention.

“My biggest thing was I wanted to ahead of time have all the things in like the background set up, like where we’re going to go with website, merchandise and stuff like that,” Mertz said. “My dad and my family have done a great job of taking that off my plate, so I can focus on what’s going on around here. My biggest thing is it’s great to make some money off of it, but I can’t let it become a distraction at all."

Chryst said the reminder he has given to all players regarding name, image and likeness is that it will work best for players who contribute to a winning team. He wants to make sure nothing hinders the focus of a program that generally has prided itself on reliability.

He’s confident this group can bring that consistency back this season.

“They’re willing to do what they can to be the best they can,” Chryst said. “I also think it’s a group that values team. Now our actions have to follow that, right, but I think we’ve got a number of guys that have enough experience, that truly know and value to do something well, it takes purposeful effort and action.”