BC opts out of bowl game to spend Christmas at home 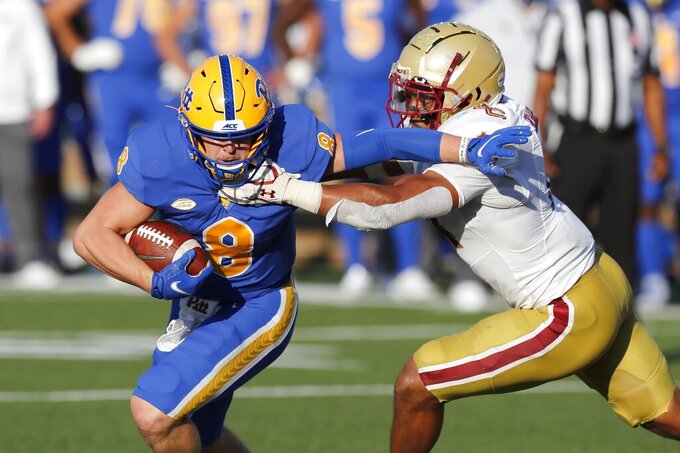 FILE - In this Saturday, Oct. 10, 2020, file photo, Pittsburgh quarterback Kenny Pickett (8) evades Boston College linebacker Max Richardson during the first half of an NCAA college football game, in Boston. Pickett’s coming out party arrived three years ago against the second-ranked Hurricanes when he ran for two scores and threw for another in a 24-14 upset. Pittsburgh plays against Miami on Saturday, Oct. 17. (AP Photo/Michael Dwyer, File)

BOSTON (AP) — Boston College, which managed to escape the worst of the coronavirus outbreak and the schedule and roster shuffling that has affected so many other college football teams, is passing on the opportunity to play in a bowl so players can spend Christmas with their families.

BC is the first school to forego the postseason because of the pandemic.

“A lot of these young men haven’t hugged their loved ones since June,” athletic director Pat Kraft said Thursday in a conference call with reporters. “I’m very, very, very proud of them and the sacrifices they’ve made.”

Meanwhile, four more major college football games scheduled for Saturday — including two with ranked Big 12 teams — were canceled, bringing the total to 10 for this week. No. 13 Oklahoma will not play at West Virginia because of COVID-19 issues with the Mountaineers. No. 23 Texas paused its football activities, calling off the season finale at Kansas.

And the 10th-ranked Duke men's basketball team said it will not play any more nonconference games this season.

BC was arguably the most successful team in the country at navigating the COVID-19 outbreak, with one positive test all season -- and that was in the final week. The Eagles (6-5, 5-5 Atlantic Coast Conference) played all 11 scheduled games, with just one of them postponed just one day — because of shuffling elsewhere in the ACC.

“What we did with COVID was bigger in my opinion than any game we could have won," said coach Jeff Hafley, who was in his first year at BC. “I wish we could play every Saturday. But I don’t have to sit in a dorm room by myself."

But Hafley said he could sense the strain of the unusual season on his players and called together his “leadership council” -- one representative from every position group -- to get a sense of how the team felt.

Together, they decided to pull the plug.

“When (linebacker Max Richardson) told the team that they’re going home to see their families, it was an uproar,” Hafley said. “At that moment I knew 100% it was the right decision.”

The rookie coach alluded to the fact that pandemic was still spreading in Massachusetts and most of the country. The worst-case scenario, he said, would be for the team to stay on an otherwise empty campus through December and then have the bowl canceled anyway.

“It’s getting worse,” Hafley said. “For us to go through three weeks of practice and not know: ‘Is the bowl game really going to happen?’ Are we going to miss Christmas with our families and then be told on the 25th that we’re not going to play?”

Duke's decision followed coronavirus-related postponements of three nonconference games this year. The school said it was a precaution that would also allow players to spend time with families over the holidays.

“This is the best decision we could make as a program, in making sure that we are doing the right thing for our players,” coach Mike Krzyzewski said.

Texas (6-3, 5-3) returned three positive tests after blowing out Kansas State in football last week, prompting school officials to shut down practice. The Longhorns had a walkthrough Wednesday only to discover there were more positive tests.

Washington at Oregon also was canceled. The rivalry game would have determined the Pac-12 North champion and a spot in the conference title game.

Elsewhere, Utah State’s men’s basketball team is pausing full team activities and has canceled its game against Weber State on Saturday; they are exploring options for other dates. The Aggies’ game against Dixie State on Tuesday may also be impacted.

Texas Tech closed its football facility after eight members of the staff joined coach Matt Wells among those with positive tests for COVID-19. The season might not be over the Red Raiders (4-6) since all teams are eligible to participate in bowl games. In the Mid-American Conference, Miami (Ohio)’s game at Bowling Green was canceled.

South Carolina has called off its men’s basketball game at George Washington on Monday because of a positive COVID-19 test. The school said the earliest the team could resume activities was Dec. 16.

Georgia canceled its women’s basketball game against Radford because of a positive COVID-19 test within the Highlanders’ program.