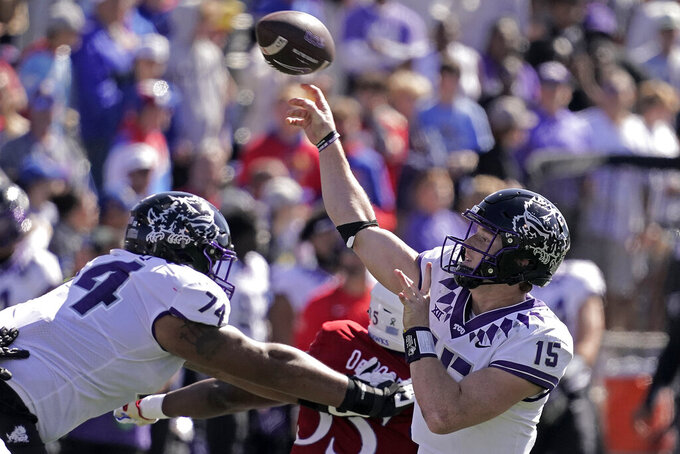 Line: TCU by 3½, according to FanDuel Sportsbook.

A matchup of the Big 12's only remaining undefeated, and highest-ranked teams. The winner will join idle No. 17 Kansas State at 3-0 atop the conference standings. Oklahoma State's Spencer Sanders and TCU's Max Duggan are 1-2 in the league for total offense, passing yards and total touchdowns. It is the second undefeated matchup in a row for TCU, which beat No. 19 Kansas 38-31 last week. The Cowboys have won their last six games since losing to Baylor in last year's Big 12 championship game. TCU has won six of its seven games since a 63-17 loss last November in Stillwater, when the Frogs were in the aftermath of coach Gary Patterson's departure and Duggan was out because of a lingering foot injury.

TCU's offensive line has allowed only seven sacks while Oklahoma State has a Big 12-high 3.2 sacks per game. Three of the Cowboys defensive ends are among the league's top seven: Brock Martin with four, while Collin Oliver and Ben Kopenski have three each. Oklahoma State is the FBS leader with 10.2 tackles for loss per game.

Oklahoma State: Bryson Green is coming off a career-high 115 yards receiving last week against Texas Tech, and leads the Cowboys with four receiving touchdowns. The sophomore from Allen, Texas, is averaging 17.8 yards per catch.

TCU: Quentin Johnston had 14 catches for 206 yards and a game-winning 24-yard TD with 1:36 left in last week's win over Kansas. The catches matched the most by an FBS player this season, and the yards were the most in the Big 12.

Sonny Dykes is the first TCU coach since 1929 to win his first five games with the Frogs. Dykes also started 5-0 each of the last three seasons when he was still at SMU. ... Oklahoma State is going for its eighth consecutive Big 12 victory, which would match its longest streak since 2015. ... The Frogs are playing a third consecutive ranked opponent for the first time since the end of the 2015 season. ... TCU leads the nation with 8.1 yards per play, and is third with 530 total yards per game.