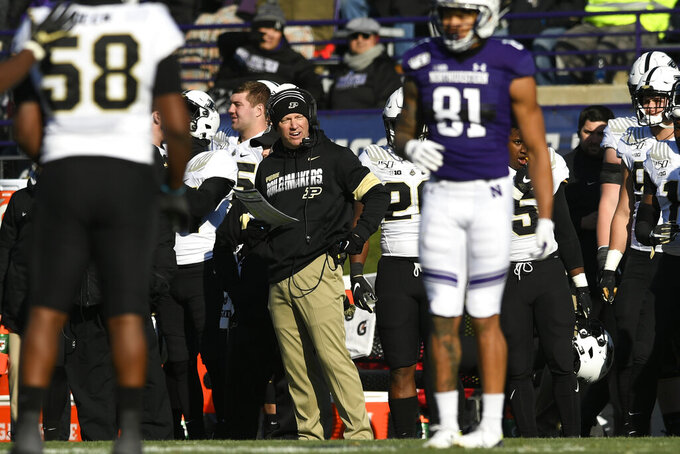 Scott Frost received a two-year contract extension that will keep him at Nebraska through 2026.

The university announced the extension on Saturday before Frost and the Cornhuskers took the field against Wisconsin.

"I'm grateful,” Frost said. “This is where I want to be. People in Nebraska know me pretty well and I'm a fighter and I'm not going to quit until this is right.”

Frost is now 8-14 at Nebraska after a 37-21 loss to the then-15th-ranked Badgers. For comparison's sake, Willie Taggart, who was named Florida State's coach three days after Frost was hired in Lincoln, went 9-12 in Tallahassee before getting fired.

Despite the slow start, Frost, who played quarterback at Nebraska and led the Cornhuskers to a 13-0 season in 1997, still has the support of his administration and his players.

“I think Coach Frost deserves it and he is going to get this thing right,” said Nebraska sophomore quarterback Adrian Martinez. “Ultimately, it is going to be up to us as the players to go out there and execute. I am excited for him. I think it is a good thing for Nebraska football and we are going to continue to build this thing."

Nebraska’s support of Frost is a trend in the Big Ten West. With Frost’s extension, all the division’s coaches are under contract for a lengthy number of years.

Minnesota’s P.J. Fleck this month was extended through 2026. Fleck has the 11th-ranked Golden Gophers (9-1, 6-1 Big Ten, 10th in College Football Playoff) in the midst of their best season in decades. The Fleck and Frost extensions were done before the December letter of intent signing date, showing support in case prospective recruits are wondering if the guy they choose to sign with is going to be around.

Northwestern’s Pat Fitzgerald in April 2017 signed a 10-year extension through 2026, while 64-year-old Kirk Ferentz signed an extension in September 2016 to remain at Iowa through 2026.

Purdue in April gave Jeff Brohm a new seven-year contract through 2025 after Louisville showed interest in him. Illinois in November 2018 gave Lovie Smith a two-year extension through 2023. That move has proven to be the right one, as Smith has the Fighting Illini sitting at 6-4 (4-3 Big Ten) with wins over Wisconsin and Michigan State.

Paul Chryst played quarterback at Wisconsin in the late 1980s and returned as an assistant under then-coach Barry Alvarez. Alvarez, now the school’s athletic director, gave Chryst a one-year extension last January. Chryst is under contract in Madison through Jan. 31, 2024.

“I’ve always felt privileged to be working for Barry,” Chryst said. “And then you put that combination (of) working for Coach Alvarez at this university, it means a ton. When I had an opportunity and got hired as an assistant, I felt that was enough. I still feel that same way.”

Like Frost, Chryst has earned the trust and respect of his players.

“He really knows his players,” star running back Jonathan Taylor said of Chryst. “He does a good job of trying to put them in a position to help them grow.”

The contract extensions and votes of confidence from the schools’ administrations speak to the caliber of coaches they believe they have in the Big Ten West.