Briles unpenalized but not unscathed in Baylor NCAA report 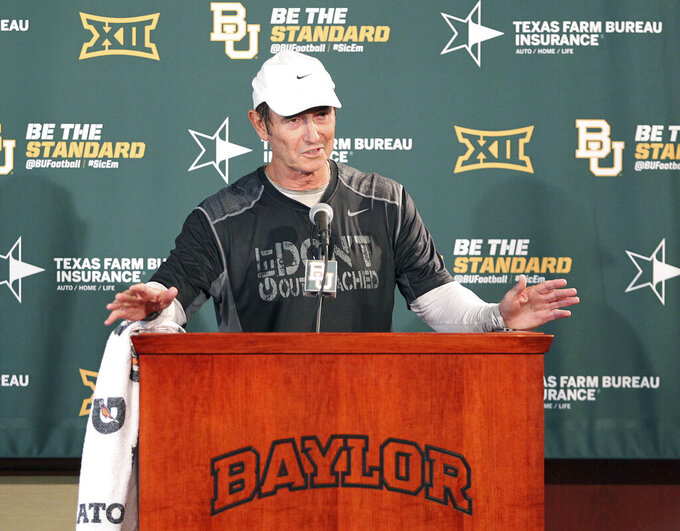 FILE - In this Monday, Aug. 31, 2015, file photo, Baylor head football coach Art Briles addresses the media in Waco, Texas. The NCAA infractions committee said Wednesday, Aug. 11, 2021, that its years-long investigation into the Baylor sexual assault scandal would result in four years probation and other sanctions, though the “unacceptable” behavior at the heart of the case did not violate NCAA rules. The NCAA ruling came more than five years after the scandal broke at the world’s largest Baptist university, leading to the firing of successful football coach Art Briles, and the later departures of athletic director Ian McCaw and school president Ken Starr. (Jerry Larson/Waco Tribune-Herald via AP, File)

Five years after he was dumped by Baylor, Art Briles was front and center in a withering NCAA infractions report Wednesday that ripped him for failing to look into horrific and potentially criminal allegations involving his football players.

Yet the infractions panel didn’t find him guilty of any NCAA violations, and his attorney said he is clear to return to college coaching.

“My client Art Briles has been completely exonerated and cleared of all NCAA violations alleged against him,” the attorney, Scott Tompsett, told ESPN. “As the NCAA Committee on Infractions explained, the conduct at issue was pervasive and widespread throughout the Baylor campus, and it was condoned or ignored by the highest levels of Baylor’s leadership.”

Briles was fired by Baylor after an external investigation revealed in May 2016 that the world's largest Baptist university had for years mishandled and failed to properly respond to numerous sexual assault allegations by students, including some against football players. Briles has long disputed the allegations against him.

In its 51-page report, the infractions committee didn't hold back on Briles.

“In each instance, when the head coach received information from a staff member regarding potential criminal conduct by a football student-athlete, he did not report the information and did not personally look any further into the matter," the panel said. "His incurious attitude toward potential criminal conduct by his student-athletes was deeply troubling to the panel.

“As one panel member observed at the hearing when questioning the head coach’s lack of response to this information, ‘a lot of these things that we’re talking about, they’re not NCAA rules violations . . . (or) university policy violations. They’re felonies. (W)e’re talking about rapes and physical assaults,’” according to the report. “The head coach failed to meet even the most basic expectations of how a person should react to the kind of conduct at issue in this case. Furthermore, as a campus leader, the head coach is held to an even higher standard. He completely failed to meet this standard.”

Still, the panel didn't find Briles guilty of any rules violations when putting Baylor on four years or probation and imposing recruiting restrictions on the football program.

The one former Baylor employee directly sanctioned by the NCAA was former director of football operations Odell James, who was hit with a five-year show cause order. A representative of James said James, who was on Baylor's staff from 2004-15, was being improperly punished for declining an in-person interview and was exploring options to challenge the decision.

The NCAA did find rules violations occurred between 2011 and 2016, including impermissible benefits and drug testing violations in the football program, and violations involving the institution’s predominantly female student host program.

But the infractions panel reluctantly agreed with Baylor that the mishandling of various allegations on the Waco campus "did not constitute violations of NCAA legislation.”

The 65-year-old Briles hasn't coached at the college level since leaving Baylor, where he led the Bears to their only two Big 12 Conference titles while going 65-37 from 2008-15. Baylor had four 10-win seasons in a five-year span from 2011-15, after only winning 10 games once before that.

Five wins from the 2011 season, when the Bears went 10-3 and quarterback Robert Griffin III became the school's only Heisman Trophy winner, could be vacated because of the use of an ineligible player who did receive impermissible benefits.

Briles insisted many of the allegations against him were false; at one point, he even sued three school regents and a vice president for libel and slander, claiming they falsely stated he knew of reported assaults and alleged gang rapes by players and didn’t report them.

In February 2017, university regents revealed new details in the case, including texts and quotes from conversations alleging Briles ignored sexual assaults by players and failed to alert university officials or discipline athletes. In one alleged gang rape incident in 2013, Briles was shown a list of players a victim had identified.

“These are some bad dudes. Why was she around those guys?,” Briles is quoted in the filing as saying.

Baylor paid Briles more than $15 million after firing him. He later acknowledged making mistakes and apologized for “some bad things” that happened under his watch.

Briles coached briefly in Italy and then at a Texas high school in Mount Vernon.