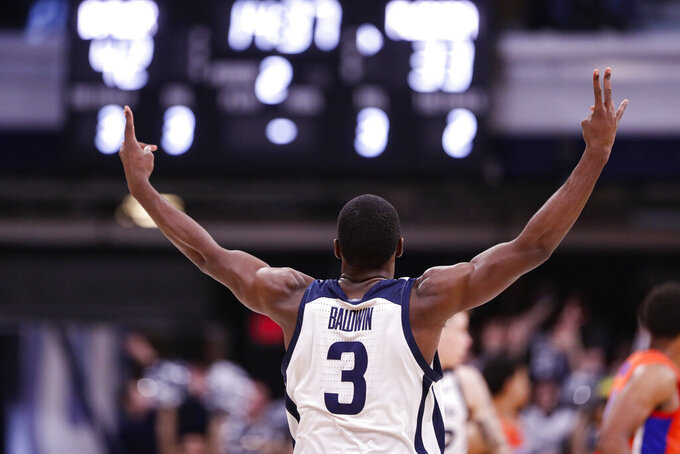 Butler's trip to Baylor this week probably wouldn't have mentioned a merit when a list of intriguing nonconference matchups was generated before the college basketball season tipped off.

The No. 18 Bulldogs, who finished with a losing record last season after they were bounced in the first round of the NIT, have rolled to a 9-0 start behind the exceptional play of preseason All-Big East guard Kamar Baldwin and an exceptionally deep rotation. The run includes wins over the Big Ten (Minnesota), the Pac-12 (Stanford) and the Southeastern Conference, which took a serious hit from the Bullodogs when they knocked off Missouri, Ole Miss and Florida.

The No. 11 Bears, meanwhile, lost a trio of seniors in Jake Lindsey, Makai Mason and King McClure and then watched Mario Kegler get booted from the team. But all the Bears (9-1) have done is rip off six straight wins since losing to Washington in the Armed Forces Classic, including wins over No. 17 Villanova and last week over then-No. 12 Arizona.

One thing is certain: The Bulldogs-Bears matchup should produce a bit more atmosphere than Baylor's game against the Wildcats, which went head-to-head with its football team's game against Oklahoma in the Big 12 championship.

“To be honest,” Baylor coach Scott Drew said, “there were more people than I thought there would be. Everybody was so excited for our opportunity football-wise and everybody was supporting basketball, but you can't be in two places at once.”

The Bears lost a nip-and-tuck game to the Sooners, of course, and will play Georgia in the Sugar Bowl. But with that game a few weeks away, the attention on campus should flip over to the red-hot basketball team for a bit.

There are only a handful of games involving ranked teams before the weekend, largely due to the fact that most schools have finals this week. Fourth-ranked Maryland faces Penn State and No. 5 Michigan plays Illinois as Big Ten play begins to heat up, Texas Tech plays top-ranked Louisville in the Jimmy V Classic at Madison Square Garden on Tuesday night, and No. 24 Colorado has a busy week with games against Northern Iowa and Colorado State.

It won't be hard to find a good game to watch come Saturday, though. The football season finally cedes its weekend grip on the college sports scene and a slew of Top 25 teams have big games as they tune up for conference play.

The feast begins at noon ET when No. 10 Oregon heads to Ann Arbor to face the Wolverines, then continues in the afternoon when Penny Hardaway leads No. 13 Memphis down the road to Knoxville to face No. 19 Tennessee. No. 12 Auburn gets a visit from Saint Louis, which has only lost to Seton Hall, in the Mike Slive Invitational. The nightcap features sixth-ranked Gonzaga heading to the McKale Center to face Arizona.

What normally would look like a potential blowout against Wofford is suddenly no sure thing for No. 17 North Carolina on Sunday. The Tar Heels have tumbled from No. 6 in the AP poll after losing three of their last four games — though in fairness, they were to Michigan, Ohio State and Virginia.

“I’m just beside myself,” Tar Heels coach Roy Williams said. “Since last year, last two years, last three years, I’ve gotten to be the worst coach I can ever remember because we are doing some of the most unbelievable things of any team I’ve ever had. We got a job. We got to try to get better later this week.”