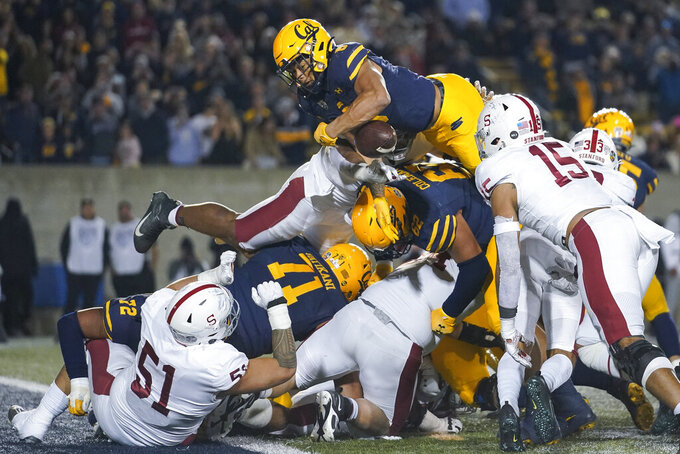 California running back Jaydn Ott, top, fumbles the ball while attempting to dive into the end zone against Stanford during the second half of an NCAA college football game in Berkeley, Calif., Saturday, Nov. 19, 2022. California recovered the ball. (AP Photo/Godofredo A. Vásquez)

BERKELEY, Calif. (AP) — Jackson Sirmon scored on a 37-yard return following a wild play with two fumbles and California rallied from a double-digit deficit in the fourth quarter to beat Stanford 27-20 in the Big Game on Saturday.

“It’s really neat... as a defensive player, you don’t get a lot of opportunities to score touchdowns and you have to enjoy them when you get them. It was very neat especially considering the timing of it all.”

The Golden Bears (4-7, 2-6 Pac-12) trailed 17-6 in the fourth quarter when Jack Plummer started the comeback with a 1-yard touchdown pass to Monroe Young.

Then things really went crazy on the ensuing possession for Stanford (3-8, 1-8).

Backup quarterback Ashton Daniels took a direct snap and ran to his left. He was stripped of the ball by Daniel Scott and Cal's Jeremiah Earby recovered. But Daniels then knocked the ball loose from Earby for a second fumble on the play only to have Sirmon scoop it up and run in to give Cal a 20-17 lead with 9:54 to play.

“It bounced right to me,” Sirmon said. “I was in the right place at the right time. All I did that play is I didn’t mess it up. The ball came right to me and I ran with it.”

Stanford had three more drives to rally. But the Cardinal punted twice and then McKee was intercepted by Scott with just more than two minutes to play, setting up Jaydn Ott's 1-yard run that sealed the win.

“Bottom line for us is we had the lead," coach David Shaw said. “We knew it was going to be a back and forth game. We had a lead in the fourth quarter and we didn’t keep it. Turnovers have been one of the biggest issues for us all year.”

There was little at stake in the 125th version of the Big Game other than pride and the Axe that goes to the victorious team. Both teams were eliminated from bowl contention with blowout losses last week making this the first meeting when neither team had a chance at a bowl since 2000.

This is also the first time since 1997-98 that Cal and Stanford will both have losing records in back-to-back seasons.

That didn't completely dampen the enthusiasm as Cal had its first home sellout since a 2013 game against Ohio State with a crowd of 51,892 and its first home win in the rivalry since 2008.

“It means a lot,” Scott said. “I think for us we wanted to keep the Axe here. It deserves to be here. We put in a lot of hard work. To get that win not only for the team but the whole Cal community was huge.”

Stanford: The Cardinal scored TDs on their opening drives of both halves but didn't do much else. Mitch Leigber had a 1-yard run on the opening drive and McKee threw a 9-yard TD to Elijah Higgins in the third quarter. They didn’t score again until Joshua Karty kicked a 61-yard field goal on the final play.

“We needed a couple more plays on the offensive side,” Shaw said. “Defense gave us a lot of opportunities.”

California: The Bears offense wasn't much more productive after firing OC Bill Musgrave and OL coach Angus McClure last week following a 38-10 loss to Oregon State. Cal managed just six points on their first six trips across midfield but managed to do enough in the fourth quarter to beat Stanford at home for the first time since 2008.

This year marked the 40th anniversary of “The Play” when Cal shocked Stanford with a kick return TD on the final play of a 25-20 win that featured five laterals and the Stanford band on the field.

Cal unveiled a 1,500-pound statue this week of Kevin Moen, who scored the TD and collided with a Stanford trombone player in the end zone.

This also marks the final Big Game for Cal radio announcer Joe Starkey, whose call “the band is out on the field!” was the most memorable of his 48-year career.

On a sad note, one of the players who made a lateral on that play, running back Dwight Garner, died Friday at age 58 of prostate cancer.

California: Hosts No. 16 UCLA on Friday.