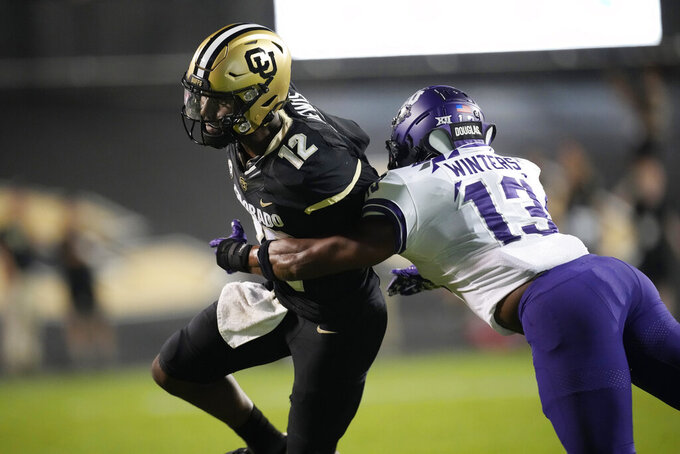 BOULDER, Colo. (AP) — They’re all set in the quarterback department at USC and Arizona may have just found the answer. The verdict’s still out in Oregon and definitely up in the air at Colorado.

Just a few snap judgments around the Pac-12 over the first week, where the QB play ranged from spectacular to spotty.

A quartet of transfers certainly shined: Caleb Williams for the 10th-ranked Trojans, Jayden de Laura for Arizona, Michael Penix Jr. for Washington and Cameron Ward with Washington State. Not as much for Oregon's Bo Nix, who struggled in a 49-3 loss to defending national champion Georgia — a loss that dropped the Ducks out of the rankings.

It was a tough time for some of the league's incumbents, too, with Utah's Cameron Rising throwing an interception in the end zone in the closing seconds of a 29-26 loss to Florida. The Utes dropped six spots to No. 13 in the latest poll.

Colorado's Brendon Lewis struggled in a 38-13 loss to TCU, which opened the door for backup J.T. Shrout, a transfer from Tennessee who didn't play last season after hurting a knee in Colorado's fall camp. Buffaloes coach Karl Dorrell wouldn't reveal how he would divvy up snaps going forward between the two quarterbacks.

“But we do have a plan in place,” Dorrell said.

Williams followed coach Lincoln Riley to USC from Oklahoma and made an instant impact. He finished 19 of 22 for 249 yards and two touchdowns in a 66-14 victory over Rice. Williams' 86.3% completion rate was the best for a game by a Trojans QB since Matt Barkley against Colorado in 2012, according to Pac-12 research.

It was also the most points USC scored in a season opener since erupting for 76 against UCLA in 1929.

Speaking of the Bruins, UCLA veteran QB Dorian Thompson-Robinson threw for 298 yards and two scores in leading his team to a comeback win over Bowling Green. He also ran in another two scores during his 36th career start, which is tied for fourth-most by UCLA QBs. Cade McNown holds the top spot at 44.

Up the road at Stanford, Tanner McKee methodically led the Cardinal to a 41-10 win over Colgate by turning in his second career 300-yard passing game.

“There’s another level for him as well,” Stanford coach David Shaw said.

De Laura, who arrived from Washington State, helped the Wildcats snap an 11-game road skid with a 38-20 win over San Diego State. He became the first Arizona QB to throw four touchdown passes in a game since Khalil Tate in 2018.

For that, he was named the Pac-12 offensive player of the week Tuesday, edging fellow QBs Thompson-Robinson, Williams, Penix and McKee.

Next up, Mike Leach and Mississippi State come to Tucson for a late-night Saturday showdown (10 p.m. ET kickoff). Leach, the former Washington State coach, will try to find a way to contain de Laura — the QB he once recruited.

This wasn't the way Nix and the Ducks wanted to start — falling to Georgia by the largest margin of defeat in a nonconference game since 1985. Nix, a transfer from Auburn, was constantly under pressure against a swarming Bulldogs defense, completing 21 of 37 passes for 173 yards and two interceptions. Nix falls to 0-4 in career contests against Georgia.

Nix and the Ducks look to get back on track against Eastern Washington this weekend.

Ward arrived at Washington State from Incarnate Word, where he set program records for TDs and yards passing. He flashed his talent for his new team in a win over Idaho, throwing three touchdown passes.

A difficult challenge awaits for Ward and the Cougars as they travel to No. 19 Wisconsin in a nationally televised game.

Penix threw for 345 yards and four TDs as the Huskies beat Kent State 45-20. He arrived at Washington from Indiana, where he went 12-5 as the starter.

Oregon State snapped a six-game losing streak in season openers behind the play of Chance Nolan, who threw for 251 yards and two scores in a 34-17 win over Boise State in Corvallis.

“I mean, getting that first one at home, just kind of puts the season into motion," Nolan said. “Now we’re able to kind of ride that wave."