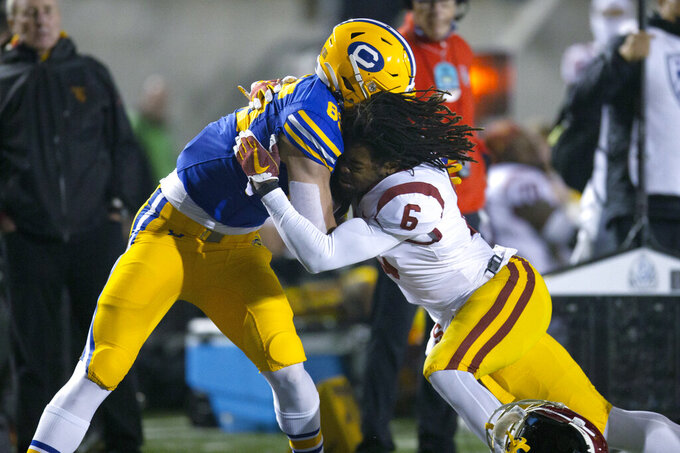 BERKELEY, Calif. (AP) — Trey Paster scored on a 55-yard fumble return in the second quarter, California’s defense made a clutch stop near the goal line, and the Golden Bears held off Southern California 24-14 in the season finale for both teams.

Christopher Brooks added a pair of short scoring runs on a day when Cal’s offense struggled reaching the end zone to help the Golden Bears (5-7, 4-5 Pac-12) to their first home win against the Trojans since 2003.

“It means a lot to end the season with a victory,” said Cal quarterback Chase Garbers, who was 18 of 21 for 177 yards. “Just the way this whole season has gone and what our team has done, t shows how big of a family we are. Had some ups and downs but came out on top tonight. The defense played lights out.”

Jaxson Dart, making his third start for USC (4-8, 3-6) in place of injured quarterback Kedon Slovis, threw a 45-yard touchdown before being forced out with an injury in the third quarter.

It was USC’s final game before new coach Lincoln Riley takes over next season.

The game – which came a day after the Pac-12 championship game – was originally scheduled for Nov. 13 but was postponed three weeks due to COVID concerns within the Bears program.

Cal’s defense has been up and down all season but came through with enough big plays hand USC its fourth straight loss – the Trojans’ longest skid since 2001.

“You miss two field goals, fumble twice, don’t capitalize in the red zone, just little things,” USC interim coach Donte Williams said. “Way too many mistakes that lead to the outcome of that game, which is a loss.”

Paster’s long return came after Elijah Hicks jarred the ball loose from running back Darwin Barlow. Paster scooped up the ball on the run and raced down the sidelines to score as the Bears went up 17-7.

“Huge plays because (the Trojans) can move the ball,” Cal coach Justin Wilcox said. “They scored a lot of points on people this year and those were the type of plays needed tonight by the defense. We just focused on practicing hard and trying to play better. We did at times. Wasn’t perfect by any means but it goes back to the competitiveness and how much the guys care about their teammates.”

Trailing by 10, USC moved inside the red zone in the third quarter when Dart was shaken up after getting drilled by a pair of defenders scrambling toward the sideline. Dart lay face down momentarily before being helped to his feet and off the field.

Miller Moss, another true freshman, replaced Dart and completed his first throw but the Trojans were stopped on fourth down when tight end Erik Krommenhoek bobbled a direct snap at Cal’s 3.

The Bears forced another turnover in the fourth quarter when Daniel Scott sacked Ross, jarring the ball free.

That set up Brown’s second touchdown that extended the Bears lead to 17.

FIRST FOR THE FRESHMAN

Moss had taken only one snap this season before being pressed into duty. He threw a 16-yard touchdown to K.D. Nixon in the fourth quarter for his first career touchdown.

Southern California: There’s already advertisements on the school’s website encouraging fans to purchase tickets for the “Lincoln Riley era” so it’s obvious where the focus is moving forward. The Trojans have talent so Riley won’t be starting from scratch, and the buzz around campus is already building.

California: Ending the season with a win over USC is sweet for the Bears no matter what, so Justin Wilcox and his players will celebrate this one. But with 28 seniors, including quarterback Chase Garbers, Cal could be in for a lot of change next season. Then again, maybe not. All of the players have the option to return for an additional year due to the pandemic.

Southern California: The Trojans will kick off the Riley era next season with a home game against Rice on September 3, 2022.

California: Plays FBS UC Davis on September 3, 2022 as part of a non-conference schedule that includes a trip to Notre Dame two weeks later.