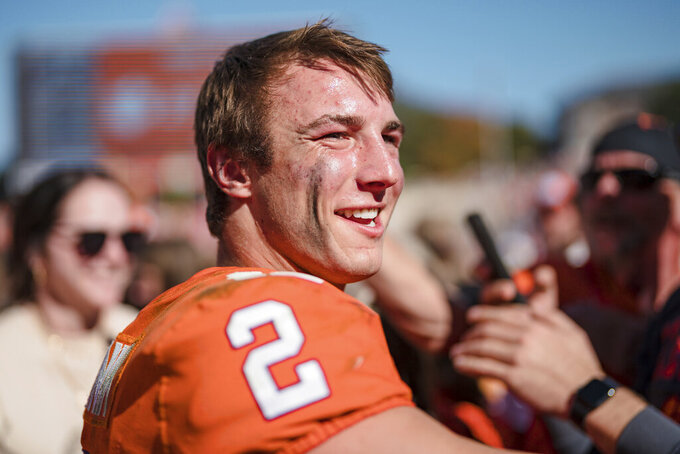 CLEMSON, S.C. (AP) — The similarities to 2018 abound for No. 5 Clemson in its latest victory — and perhaps can lead the Tigers to the same championship chase.

Clemson had lost starting quarterback Trevor Lawrence to injury and called on little-used freshman Chase Brice to rescue the team against Syracuse with a fourth-quarter rally during their national title season.

On Saturday, it was newcomer Cade Klubnik, in for ineffective starter DJ Uiagalelei, who sparked the Tigers. They rallied from 21-10 down in the final quarter for a 27-21 win over Syracuse, who slipped two spots to No. 16 after the loss. The rally kept Clemson undefeated and on pace for an Atlantic Coast Conference title — and perhaps another College Football Playoff crown.

“We continued to fight, continued to believe and when we had to have it, we got it done,” Tigers coach Dabo Swinney said.

It was hard to ignore how much this comeback looked like a 27-23 win at Death Valley over Syracuse as Brice — now a graduate transfer at Appalachian State who won at Texas A&M and beat Troy on a Hail Mary this season — rallied his team from 10 points down in the final quarter.

Back then, Travis Etienne scored from 2 yards out with 41 seconds left for the win, part of his then-career high 203 yards rushing. This time, Will Shipley's 50-yard sprint with 11:26 to go put Clemson in front for good as part of his career-high 172 yards rushing.

Swinney has said often that without the rally led by Brice, the then-No. 1 Tigers may not have made the CFP, certainly not gone 15-0 and celebrated their second national title in three years.

“You don't know how important that game was until you see how things played out,” Swinney said.

How will it play out this year for Clemson, off to an 8-0 start for the sixth time in the past eight seasons?

The Tigers get a week off to clean up the mistakes evident against Syracuse (Uiagalelei threw two picks and had a fumble returned 90 yards for a touchdown) before playing at Notre Dame, where they had a memorable 47-40 overtime loss in the COVID-19 impacted season of 2020.

Clemson will get its first chance to wrap up the ACC Atlantic at home on Nov. 12 against Louisville as it seeks to extend its ACC record with its 39th straight home win.

The Tigers close league play at home against struggling Miami on Nov. 19 before wrapping up the regular season against state rival South Carolina on Thanksgiving weekend. There's the ACC title game on Dec. 3 where North Carolina, with a two-game lead in the Coastal Division, could be waiting.

Stay perfect through all that and it's likely Clemson is back in the playoff hunt with its seventh CFP berth in eight seasons.

To get that far, Uiagalelei must regain the steady form he's shown all season. He came into the week with just two interceptions before Syracuse picked him off twice, both on uncharacteristic throws.

Swinney and Streeter made it clear Uiagalelei remains QB No. 1.

Uiagalelei knew his benching was the necessary call and was glad the freshman delivered.

“I am thankful for him and for the coaches,” the junior said. “That means a lot when you know people support you like that. But all I want to do is win.”

Swinney didn't discount calling on Klubnik again if things get desperate down the stretch. Shipley believes the game showed Clemson's toughness and the team is a threat for another championship.

“The grit, perseverance, the tight-knit group we have right here, we have the ability to do some special things," he said. “We're the only ones holding us back right now.”