Coastal, La.-Lafayette, Liberty aim to show '20 was no fluke 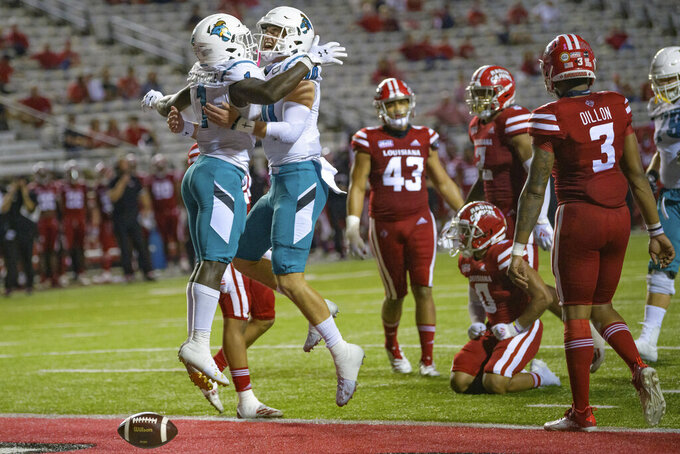 The Ragin’ Cajuns, Chanticleers and Flames became household names for college football fans last year, when the upstart programs at Louisiana-Lafayette, Coastal Carolina and Liberty supplied some of the most compelling campaigns of the season.

When a mid-major team succeeds to that extent, it is “fantastic for college football because it opens people’s eyes to levels or teams or geography of football being played that’s better than a lot of people realize,” said Cole Cubelic, a former offensive lineman at Auburn and ESPN college football analyst who focuses on the SEC and the Sun Belt Conference.

As the 2021 season kicks off in earnest this week, analysts and fans alike are be watching to see if ULL, Coastal and Liberty can repeat or build on last year.

For now, they’re getting more respect from poll voters.

Coastal Carolina was ranked 22nd in the preseason AP Top 25 Poll, followed by the Ragin’ Cajuns at No. 23. Liberty received the fourth-most votes of teams outside the top 25 — more votes than Auburn, North Carolina State or Michigan.

“Any time you’re preseason ranked, it doesn’t mean anything once you kick off, but it does bring recognition and gives the fan base something to be excited about," said Chanticleers coach Jamey Chadwell, whose team posted a season-opening 52-14 victory over The Citadel on Thursday night.

“And if you go out and have phenomenal year at our level, you don’t have to climb as high” to contend for a major bowl bid, Chadwell added. “Last year, nobody knew anything about us."

Liberty coach Hugh Freeze contends that the simultaneous banner years for the Cajuns, Chanticleers and Flames in 2020 were by no means a pandemic mirage.

“I know we were 10-1 and won a bowl game against a top-15 opponent,” Freeze said, referring to Liberty’s 37-34 Cure Bowl triumph over then-No. 9 Coastal Carolina last season. “Whether they deserved to be in the top 15 is not for me to say. I thought they were dang good and I think we were pretty good.”

The Ragin' Cajuns, who were 2020 Sun Belt co-champions with Coastal Carolina, are coming off two straight double-digit-win seasons that culminated with bowl victories. They've come back with an experienced team that sounds hungry for even greater success.

“We’re optimistic,” ULL coach Billy Napier said. “I do think the resume of our conference kind of speaks for itself. As of late, in particular, our league is very competitive outside of our league.”

The Ragin' Cajuns knocked off Iowa State of the Big 12 early last season. Coastal Carolina beat Kansas of the Big 12 and then-No. 8 BYU.

Liberty, an FBS independent, upended Syracuse and Virginia Tech of the ACC.

Louisiana-Lafayette opens this season at No. 21 Texas on Saturday.

“They punch you in the face on offense,” Cubelic said of the Cajuns. “They know how to recruit linemen. They put an emphasis on running ball and getting physical. ... I wouldn’t be surprised if they beat Texas.”

The Chanticleers host Kansas on Sept. 10 and have another influential non-conference tilt against 2020 MAC runner-up Buffalo on Sept. 18.

Liberty’s schedule includes visits to Syracuse on Sept. 24 and Ole Miss on Nov. 6. The Flames also host the Ragin' Cajuns on Nov. 20, and time will tell what kind of bowl implications that matchup holds.

“The only thing we can do to affect those kind of conversations is to play really good," Napier said. “So, that’s what we’re focused on at this point.”

Freeze expects outside expectations to be higher for his team this season, even though the Flames' schedule is arguably more difficult, and for scrutiny to come hard and fast if they stumble.

“Any time you have success, because of the way the world works, they’re going to beat the heck out of you if, in their eyes, you don’t measure up the following year to what you already gave them,” Freeze said. “People get spoiled with success.”

Going forward, a bigger obstacle for non-power conference programs could be an apparent movement toward super conferences and major conference alliances. As television rights deals come back up, the major conferences are bound to leverage the promise of more matchups within their league to win more lucrative deals, Cubelic said.

That could further “box out” mid-majors from the types of games that allow them to bring in budget-solidifying revenue — and turn heads if they win.

“Look how massive that BYU-Coastal game was last year,” Cubelic said. “But, as we go forward, I think those (matchups) will be pretty limited — and I don’t think that part is great for college football.”