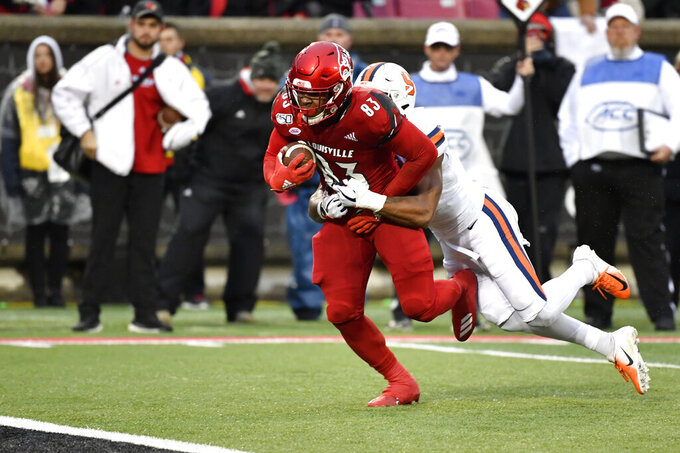 Louisville tight end Marshon Ford (83) drags Syracuse defensive back Andre Cisco (7) with him as he runs for a touchdown during the first half of an NCAA college football game in Louisville, Ky., Saturday, Nov. 23, 2019. (AP Photo/Timothy D. Easley)

The Louisville quarterback also found a small gap on the left edge before cutting inside for a second-quarter touchdown run reminiscent of Heisman Trophy-winning predecessor Lamar Jackson. Big things happened with nearly every snap to Cunningham, and his all-around performance keyed another victory for the surprising Cardinals.

Cunningham passed for a career-best five of six touchdowns accounted for, including a 14-yarder with 1:24 remaining to seal Louisville’s 56-34 win over Syracuse on Saturday.

Nothing like bidding farewell to the seniors out with a game to remember, especially after a 2-10 season they’ve long forgotten.

“It was big to get the win for those guys and send them out on a good note,” Cunningham said. “It was the last game for them at Cardinal Stadium, and what better way to go out than with a win.”

Cunningham passed for three TDs and rushed for a 20-yard score in the first half alone on a cold, misty afternoon. The sophomore added a 28-yard scoring pass early in the third, one of several the Cardinals needed during a wild second half in which the schools alternated touchdowns three times.

The sophomore’s final TD pass might have been his most critical for Louisville (7-4, 5-3 Atlantic Coast Conference) as Syracuse tried to rally. The Orange turned it over twice on downs deep in Louisville territory, with the last ending on three consecutive penalties and a failed a fourth-down pass at the 6.

Javian Hawkins’ 47-yard run set up Cunningham’s 14-yard TD pass to Tutu Atwell as the bowl-bound Cardinals capped conference play with another victory in their turnaround season. They also ended the postseason prospects for Syracuse (4-7, 1-6) a season after the Orange won 10 games including a bowl.

“We were able to get that ball back and then the offense, we take off five, almost six minutes and score a touchdown,” Cardinals coach Scott Satterfield said. “That’s how you win ball games, and it was a great team effort.”

Cunningham completed 11 of 20 passes for 238 yards and rushed eight times for 60. Hawkins established a school rushing record for a freshman by totaling 233 yards on 23 carries.

“I trusted my line, everybody up front. It was just, we wanted it.”

Atwell added 152 yards receiving to break 1,000 as well, highlighted by a 90-yard TD in the second quarter. Hassan Hall carried eight times for 71 yards with a 12-yard TD.

“Those guys are playmakers,” Satterfield added. “We always wanted to have an explosive offense. The fact that we can run and pass puts a lot of pressure on the defense.”

Moe Neal rushed for 163 yards and a TD while Syracuse quarterback Tommy DeVito threw for 153 and two scores before leaving in the fourth with an unspecified injury coach Dino Babers said was sustained in the first half. Clayton Welch completed 3 of 4 passes for 96 yards but couldn’t complete the comeback.

There was a scary moment early in the third quarter as Syracuse kicker Sterling Hofrichter was injured after being accidentally kicked in the head by a teammate on a kickoff return. The senior was able to get up and walked off the field to cheers. He did not return and was replaced by Nolan Cooney on kickoffs.

Syracuse: A week after a 43-point road rout of Duke, the Orange played catch-up all day to the Cardinals. They made it interesting in the third and fourth quarters but couldn’t convert fourth-down chances deep in Louisville’s end.

“Those guys are like cheetahs,” coach Dino Babers said of Louisville. “You can pull them down with one hand, and you’re sure you could. But if you don’t get that one hand on them, then they take off.”

Louisville: The Cardinals outgained Syracuse 608-510 and came up huge on third down, converting 8 of 11 chances. Cunningham’s arm and feet were key, though he had plenty of help from Hawkins and Atwell.

Louisville visits archrival Kentucky on Saturday in a clash for the Governor’s Cup.