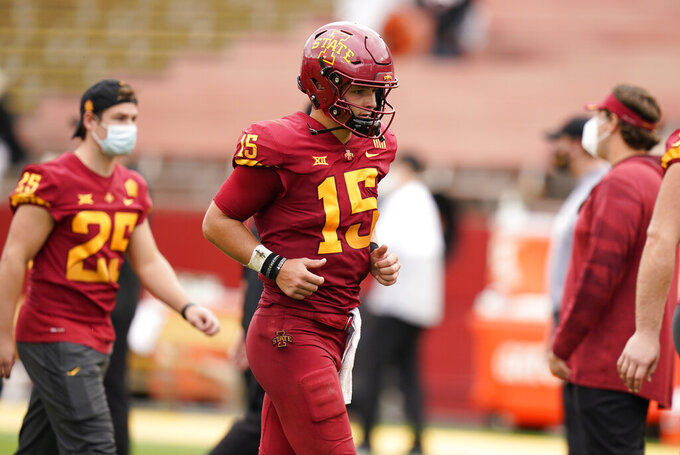 Iowa State knows all too well about picking up the pieces after a heartbreaking loss and getting in the right frame of mind for the next game.

The Cyclones are calling on that experience again heading into their Big 12 opener at TCU on Saturday following their home loss to double-digit underdog Louisiana-Lafayette on Sept. 12.

“Obviously we don’t want to be in situations where we have to bounce back after a hard loss,” junior linebacker Mike Rose said Tuesday, “but these past couple years we’ve been in these exact situations. We’ve bounced back before, so we need to have that same attitude of having to go back to work and bouncing back like we have in the past.”

The 31-14 loss to the Ragin' Cajuns of the Sun Belt Conference was crushing. It knocked the Cyclones out of the Top 25 and put a damper on the excitement surrounding the team. Iowa State was a trendy pick to make it to the Big 12 championship game for the first time.

That goal, of course, remains as Big 12 play begins. The Cyclones are three-point road favorites against a TCU team team picked sixth in the conference. The Horned Frogs on Tuesday named Matthew Downing the starting quarterback for Saturday's game.

The Cyclones are 10-4 after losses since 2017. Last season, they followed a one-point loss to Iowa with a 52-point win over Louisiana-Monroe and a two-point loss at Baylor with a 25-point win over TCU. They dropped consecutive close games against Oklahoma State and Oklahoma before beating nationally ranked Texas, 23-21.

Coach Matt Campbell said safety Greg Eisworth, defensive lineman JaQuan Bailey and tight end Chase Allen were among the players who spoke up in the locker room immediately after the loss.

“That’s where we’ve grown in four or five years, the leadership," Campbell said. “They put perspective and reality to what occurred."

Brock Purdy played one of his worst games, completing fewer than half his passes for just 145 yards with an interception and no touchdowns. Campbell said he expects Purdy to rebound at TCU.

“He carries a lot of ownership in terms of the success or failure of a play or game,” Campbell said. “You constantly have to remind Brock that he is one player and that’s what makes football really special. It’s the greatest team sport known to mankind. You continue to remind him of that and to live in your discipline. Sometimes you want to be so great so bad, you default to things you don’t want to do."

Breece Hall, who had no fumbles in 184 touches last year, lost the ball on his sixth carry, and the Cyclones had only 99 of their 303 total yards in the second half.

The defense allowed 272 yards, 78 coming on a touchdown pass, but special teams surrendered kick and punt returns for TDs.

“Everyone was obviously disappointed after the game,” Rose said. “But a lot of that attitude didn’t linger much after Saturday or Sunday right after the game.”

NOTES: ICampbell said no football player has tested positive for COVID-19 in four weeks. ... Campbell said tight end Charlie Kolar (lower body) and offensive linemen Trevor Downing (ankle) and Robert Hudson (undisclosed) are day-to-day. ... TCU will be playing its first game. Its Sept. 11 opener against SMU was canceled because of an undisclosed number of Horned Frogs player and staff had positive COVID-19 tests. TCU had an open date last week.