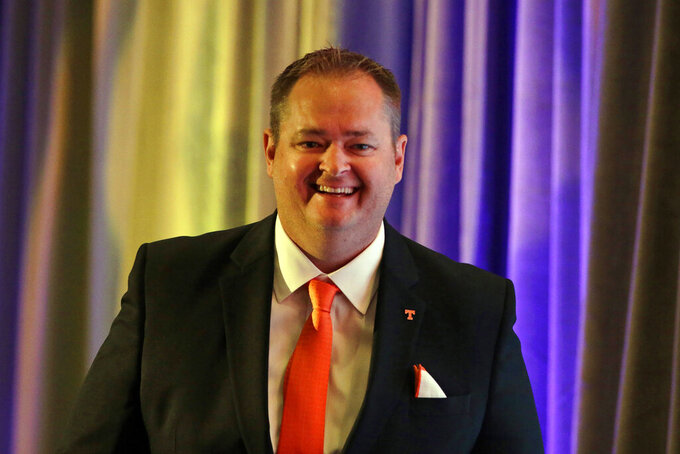 Now all three are starting quarterbacks on the other side of the country in the Southeastern Conference. From Pasadena, Young is entering his first season as defending national champion Alabama's presumed starter.

Young was in the seventh grade when he met Daniels.

“I knew back then that he was a special player,” the Bulldogs passer said. “Honestly, when Mater Dei got him, I was excited. I told MaxPreps that he would be the best quarterback in the country by the time he was a junior in high school because I’d seen him play and I think he’s a really good player.”

Ditto for Corral, who led the FBS in total offense as a junior and hails from Ventura.

“I remember in seventh grade I did a camp, and I came there and thought I was going to be by far the strongest, biggest arm,” said Daniels, who is from Irvine. "I had a good arm when I was a seventh grader, and that dude Matt rips it, like as a seventh grader. I thought he was a high schooler.

“He’s just always had a cannon. We became buddies instantly. Honestly, we’ve been good friends since then.”

Lane Kiffin brought proof to the podium on his last visit to Southeastern Conference media days that he wasn't the coach who omitted Tim Tebow from his preseason All-SEC ballot.

That was 12 years ago. Then Kiffin was head coach at Florida rival Tennessee. He returned Tuesday representing Mississippi and thinking his own passer, Corral, should get that nod going into the season.

Then-South Carolina coach Steve Spurrier admitted later that Tebow was inadvertently left off his ballot in favor of the Rebels' Jevan Snead. Kiffin voted for Tebow.

“As usual, I was accused of that,” Kiffin said. “So I brought my ballot to show everyone, to show (then-Florida coach) Urban (Meyer).”

Kirby Smart got a little reality check on a road trip to August over the summer for his son's all-star baseball games. The Georgia coach signed a few autographs at a hamburger place and even had his picture taken holding someone's baby.

In case he needed a humility check, he got one.

“By now, my kids are kind of giggling, and the last one she said, Are you a track star? And my daughter almost spit out her food and just thought it was hilarious, and at this point, I said, No, ma’am, I coach football at the University of Georgia.”

Josh Heupel said the big men are among the biggest differences between the SEC and other conferences. The new Tennessee coach played quarterback for Oklahoma in the Big 12, was offensive coordinator at Missouri and spent three seasons as head coach at UCF in the American Athletic Conference

“The line of scrimmage is different (in the SEC), and it’s the size and the length of the bodies, you know what I mean?” Heupel said. "Up front, inside, it’s their girth. On the edges, it’s their ability to have length and speed. I thinks that the difference in the league, or the number one thing that jumps out to you.

“You can tell that just by the NFL Draft. The number of bodies that get drafted up front in particular across the board in this league.”

Kentucky defensive end Josh Paschal had his brush with celebrity at an appearance on the “Today” show. Paschal, who appeared to talk about his battle with skin cancer, said he and his mother were outside the dressing rooms when actress/singer Jennifer Lopez kept going by.

“I was looking at the stairs, and I look up, and we make complete eye contact,” Paschal said. “And she winked at me. I hope that wink was real because I’ve been telling this story ever since it happened. When I tell you I melted, I melted.”