Delaware gets its new coach a win over Navy 14-7 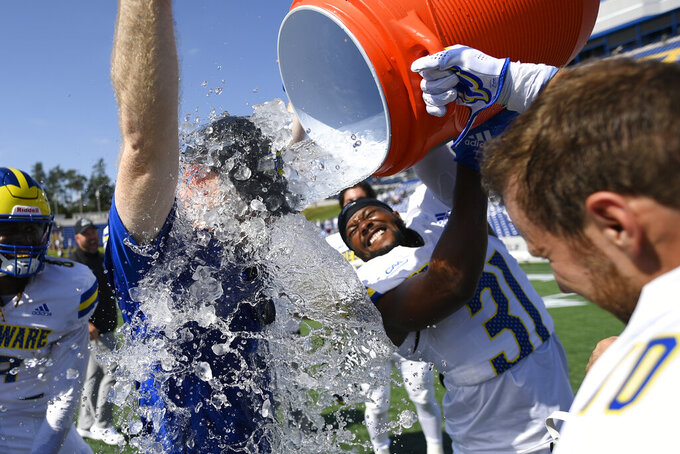 ANNAPOLIS, Md. (AP) — Nolan Henderson threw a pair of touchdown passes and FCS-member Delaware beat Navy 14-7 on Saturday to give Ryan Carty a win in his debut as the Fightin' Blue Hens' coach.

Carty, a Delaware graduate and a member of the Blue Hens' 2003 national championship team, came over from Sam Houston State where he was offensive coordinator.

It was Delaware's first win over an FBS team and Navy's first loss to an FCS team since the Blue Hens beat the Midshipmen in 2007.

Navy, which lost five fumbles all of last season, had three in the first half against Delaware. On Navy's first play from scrimmage. Tai Lavatai fumbled and Delaware converted with Henderson's 6-yard score to Bryce De Maille. Coming at 14:38, it was the quickest Delaware touchdown versus an FBS opponent since 2015.

Henderson found Chandler Harvin deep for a 51-yard score in the third quarter. Navy responded with its only points with Lavatai scoring from 2 yards out with under a minute left in the period.

A final Navy drive ended at the Delaware 9 on a fourth-down incomplete pass into the end zone.