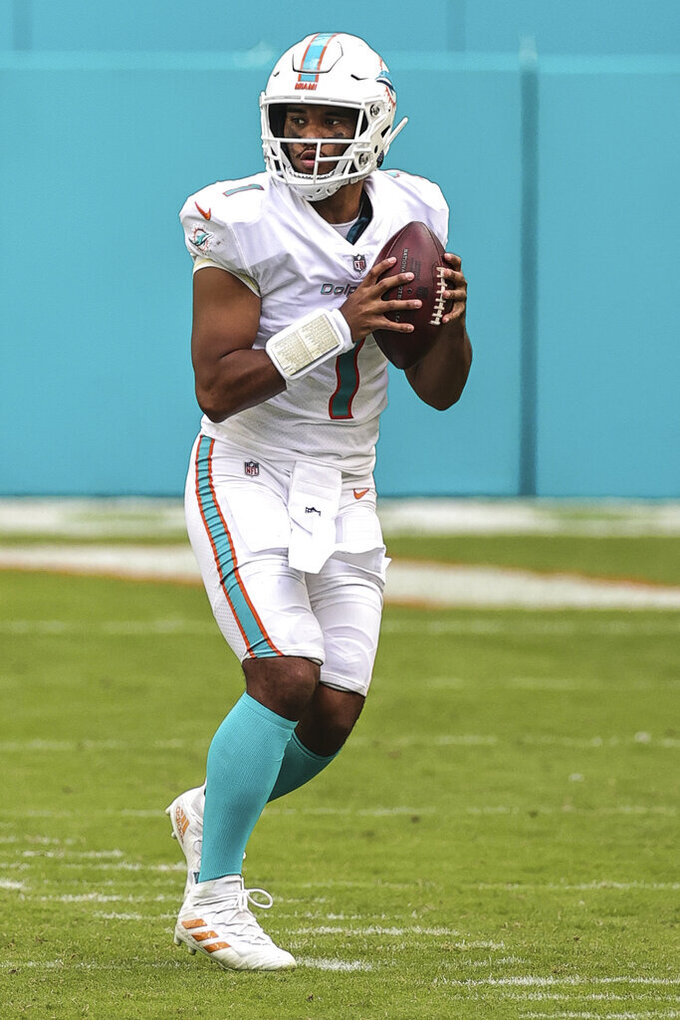 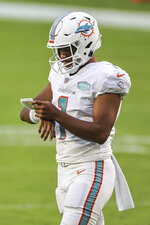 The list of “Throwin' Samoans” continues to grow — with no end in sight.

There's a wave of passers with Polynesian heritage playing at every level, showing how proud, smart, talented and unafraid they are of the game's biggest stages.

“I think it's pretty cool to see that guys from our culture can also play skill positions and quarterback,” said Tagovailoa, the Alabama national champ who won his first NFL start for the Dolphins this past Sunday. “I think that speaks volumes to how they were raised as well.”

There isn't any magical formula for the success, which is more the result of hard work, training and opportunity.

Uiagalelei is the latest to step into the spotlight.

He showcased his big arm and unflappable nature in his first college start, throwing for 342 yards and two touchdowns to rally the Tigers from 18 points down to beat Boston College 34-28.

The cool Californian — Samoan on his father's side and German on his mother's — was among the country's most sought-after prospects. He decided to go to school across the country at Clemson in part to study a year under All-American Trevor Lawrence. But with Lawrence sidelined and continuing his recovery from COVID-19, Uiagalelei will start in the Tigers' biggest game of the year at No. 4 Notre Dame on Saturday.

Uiagalelei (oo-ee-AHN-ga-leh-lay) has spoken with the Tagovailoas, Tua and his younger brother, Taulia at Maryland. And he's looked up to all the players of his ancestry who've come before him.

Uiagalelei remembers the pride he felt when he learned Tua Tagovailoa was headed to Alabama's national championship program.

“I think it's a big thing to show us Polynesians, we don't have to play in Pac 12 or in different places,” the 6-foot-4, 250-pound quarterback said. “I think this shows all the Polynesians you can play wherever you want if you have the talent.”

And in any position. They have proven there are other paths to big-time football for them besides those taken by stars before them, like Junior Seau, the late NFL Hall of Fame linebacker.

“It’s something pretty cool to look around and see that our people – Samoan people – are not always going to be on the opposite side of the ball or in the trenches – on the d-line, on the defense or on the o-line," Tua Tagovailoa said.

Polynesia is an area of more than 1,000 islands in the central and Southern Pacific Ocean. American Somoa, with a population of 55,400 in 2018, is among them.

Thompson said most players of Polynesian heritage who had successful football careers were massive offensive linemen or hard hitting tackles on defense. Born in American Samoa, Thompson knew he had the ability to be a quarterback and a leader.

When he left Washington State after the 1978 season, he was the NCAA's record holder with 7,818 yards passing and finished ninth in that year's Heisman Trophy voting.

There have been noteworthy quarterbacks of Polynesian descent, but none like this newest group.

Mariota, 6-4 and about 225 pounds, became the first Hawaiian-born player to win the Heisman with Oregon in 2014 and led the Ducks to the national title game that season. Now with the Las Vegas Raiders, he was taken by Tennessee No. 2 overall in the NFL draft in 2015 and has spent the past six years as pro.

Tua Tagovailoa proved his mettle for the Crimson Tide in the national championship game following the 2017 season, entering in the second half to rally Alabama to an overtime victory over Georgia.

Tagovailoa, listed at 6-0, 215 pounds, famously went right to his family after the winning touchdown pass to celebrate.

Thompson said the importance of faith and respect for family is a big part of Polynesian culture. Last Sunday Tagovailoa entered the stadium dressed in traditional Samoan clothes.

The Miami Dolphins starter said it's what he did on Sundays growing up and that he's proud to be “able to share that with the world."

Uiagalelei is also from a tight-knit family. But he has blocked his father David from his Twitter feed the past several years to get away from his dad's good-natured support of son DJ's career.

“Sometimes he can be over the top,” Uiagalelei said with a laugh.

The bond among players of Polynesia descent is strong. Uiagalelei received a text from former Oregon quarterback Jeremiah Masoli, another player of Polynesian descent now playing in the CFL.

That fraternity of successful Polynesian quarterbacks figures to continue growing.

Quarterback coach Vinny Passas, who works with young passers and tutored Mariota and Tua Tagovailoa, continually sees talented teenagers emulating and dreaming of success like they've seen from those getting it done now like Uiagalelei — and those before him.

Passas was beaming with pride watching those dreams become reality during a memorable three-day weekend: Taulia Tagovailoa rally Maryland over Minnesota last Friday, Uiagalelei lead Clemson's comeback vs BC Saturday and then kicked back to see Tua Tagovailoa win the first start of his NFL career on Sunday.

For Passas the trifecta wasn't an aberration. The QB coach said, “We're going to see a lot more of that."