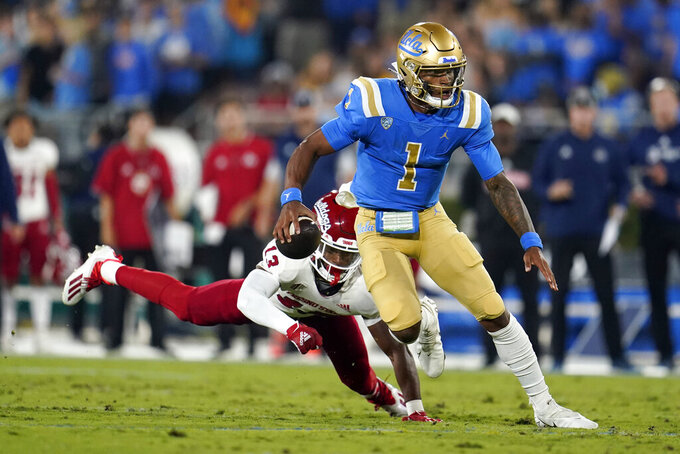 LOS ANGELES (AP) — For anyone looking for the one player who might best define the Chip Kelly era at UCLA, Dorian Thompson-Robinson is the perfect example.

The junior quarterback has seen the Bruins progress from a team that had a school-record 20 true freshmen play during Kelly's first season in 2018 to being ranked for the first time in four years. Despite last week’s 40-37 loss to Fresno State, the Bruins (2-1) remain in the rankings at No. 24 going into their Pac-12 opener at Stanford on Saturday.

“He has been right there in the passenger seat with Chip when you talk about the development of the program,” Fox Sports analyst Brock Huard said. “There have been some bumps in the road but there has also been some significant growth.”

Thompson-Robinson was thrown into the fire immediately as a freshman in 2018 when graduate transfer Wilton Speight was injured. Thompson-Robinson was recruited as one of the nation's top dual-threat QBs out of Bishop Gorman High School in Las Vegas but had truly only played one year at the position.

The on-the-job training for Thompson-Robinson and the Bruins led to some rough moments, including a 10-21 record over the first three seasons of Kelly's tenure. Despite plenty of adversity, he came back this year because of the experience returning to the program.

“I wouldn’t change it for anything in the world, but it was definitely crazy. Not even just me playing but the rest of my class,” Thompson-Robinson said. “We were kids out there playing when we were freshmen. We’re grown men now. It’s a complete team. No more selfish individuals.”

Thompson-Robinson, though, continues to epitomize the Bruins, who remain an enigma to their fan base and the nation. As many times as fans are ready to believe the program has turned the corner — such as in the 38-27 victory over then-No. 16 LSU on Sept. 4 — there come losses like Fresno State that bring expectations back down to earth.

Thompson-Robinson is one of 10 Power Five quarterbacks to play in 29 or more games, but his completion percentage is ninth and he is seventh in total offense despite being a dual-threat quarterback.

While the completion percentage still hasn't improved, new quarterback coach Ryan Gunderson has helped make improvements to Thompson-Robinson's footwork and balance. He has also learned to throw the ball away and not run backward as much under pressure, which used to result in huge yardage losses when sacked.

What Thompson-Robinson is lacking in statistics, he is more than making up for in big-play ability. He has nine completions of 35 yards or more and leads the nation with a 20.24 yards-per-completion average. After Fresno State shut down UCLA's running game last week, Thompson-Robinson had four pass plays of 38 or more yards, with two resulting in touchdowns.

Thompson-Robinson has cut down on his turnovers after leading the nation in 2019 but with teams trying to contain the rushing attack of Zach Charbonnet and Brittain Brown, Thompson-Robinson will be asked to do more as conference play begins.

“I think the one thing that I love about Dorian is his thirst for knowledge," Kelly said. "He constantly is working on his game, whether it’s the physical stuff, weight room, speed work, film watching, decision-making, how to become a better leader. He never stands pat on what he is.”

Thompson-Robinson has also tried to cut down on distractions. He took to Twitter often his first three years to battle critics, but said he is staying off social media for most of the season. He is also letting a marketing agency handle his NIL requests instead of doing it himself or having his mother do it.

UCLA is among many teams trying to right the ship after what was an awful weekend for the Pac-12 South. The five teams that played nonconference games lost, including Utah in triple-overtime to San Diego State, Arizona State at Brigham Young and Arizona to FCS school Northern Arizona. Colorado also lost handily to Minnesota.

It was a step back for the conference after Oregon's upset win at Ohio State and UCLA's victory over LSU on the first two Saturdays in September.

“It’s just a bummer because so many of those were one-possession games,” Huard said. “I still think it will be a conference overall that is going to beat up on each other this year. I don't know if Oregon can run the table. I wouldn't confidently bet on that. Everybody else in that middle of the pack is good. I still think the Arizona States, USCs and UCLAs have some very good pieces to their teams.”