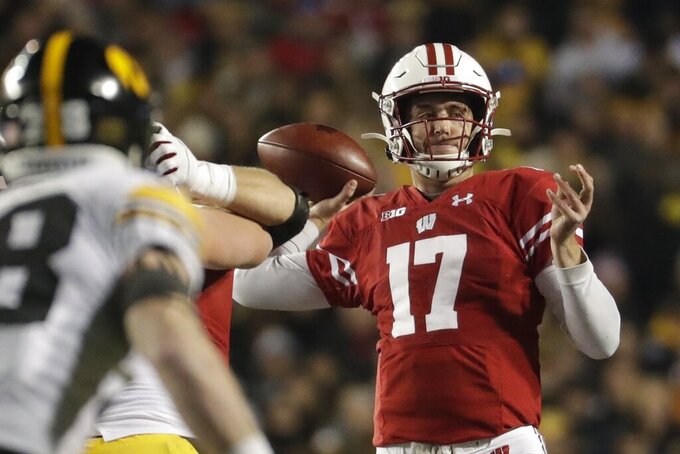 FILE - In this Nov. 9, 2019, file photo, Wisconsin's Jack Coan throws during the second half of an NCAA college football game against Iowa in Madison, Wis. Former Wisconsin quarterback Coan has indicated on social media that he is transferring to Notre Dame. Coan sent out a tweet Monday, Jan. 4, 2021, that included the Notre Dame logo along with the message, “Extremely thankful for the opportunity. Let’s get to work! @NDFootball.” (AP Photo/Morry Gash, File)

Coan posted a tweet Monday night that included the Notre Dame logo along with the message, “Extremely thankful for the opportunity. Let’s get to work! @NDFootball.”

Wisconsin disclosed two weeks ago that Coan had entered the transfer portal. Notre Dame and Wisconsin are scheduled to face each other on Sept. 25 at Chicago’s Soldier Field.

Coan made 18 starts for Wisconsin from 2018-19 but injured his right foot in preseason practice this year and underwent surgery. The 6-foot-3 senior from Sayville, New York, suited up for Wisconsin’s final three regular-season games but didn’t play. Redshirt freshman Graham Mertz has taken over as the Badgers' starting quarterback.

During the 2019 season, Coan completed a school-record 236 passes for 2,727 yards with 18 touchdowns and five interceptions as Wisconsin went 10-4 and reached the Rose Bowl.

Coan completed 68% of his passes for 3,278 yards with 32 touchdowns and eight interceptions at Wisconsin. The Badgers went 12-6 in the games Coan started, including 8-3 in Big Ten games.

Buchner is rated as the nation’s No. 3 dual-threat quarterback and No. 65 overall prospect in his class according to composite rankings compiled by 247Sports.