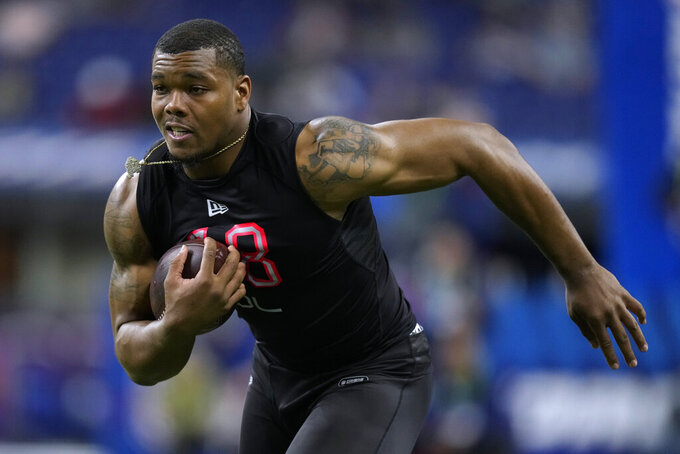 FILE - Georgia defensive lineman Travon Walker runs during a drill at the NFL football scouting combine, Saturday, March 5, 2022, in Indianapolis. The trio of Georgia defensive linemen projected as first-round selections in next month's NFL draft have highlighted the talent that enabled the Bulldogs to win the national championship. Now comes the challenge for coach Kirby Smart on Tuesday's opening day of spring practice: How does Georgia find replacements for Travon Walker, Jordan Davis and Devonte Wyatt? (AP Photo/Charlie Neibergall, File)

ATHENS, Ga. (AP) — The trio of Georgia defensive linemen projected as first-round selections in next month's NFL draft have highlighted the talent that enabled the Bulldogs to win the national championship.

NFL scouts who were impressed by the speed and athleticism of the three defensive linemen at the NFL scouting combine in Indianapolis two weeks ago will have another look at the large class of pro prospects at Georgia's pro day on Wednesday.

Georgia had a combine-leading 14 players in Indianapolis. It is possible as many as six defensive players from the national championship team will be drafted in the first two rounds.

Safety Lewis Cine, inside linebacker Nakobe Dean and outside linebacker Quay Walker join the three linemen as highly regarded players in the draft from the defense.

Wide receiver George Pickens and linemen Jamaree Salyer and running backs Zamir White and James Cook are likely to be drafted from the offense.

No void is more daunting than on the defensive front.

“We saw this coming two to three years ago,” Smart said Tuesday. “We've had this fear of maybe replacing these guys last year if they did not stay. ... That will be a challenge for us. We've lost a lot of good defensive players.”

Smart's focus shifted to the 2022 season immediately after the Bulldogs' 33-18 win over Alabama which gave Georgia its first national championship since 1980. Smart spoke of “burning down the bridges” to the 2021 season so players would focus on a new path.

“When we came back, we put that aside,” Smart said of the championship season. “You don't talk about it. ... We start fresh.”

That's not so easy for junior defensive tackle Zion Logue and others hoping to replace Davis, Wyatt and Walker. This year's defensive linemen know they can't easily dodge questions about last season.

Logue, who had 11 tackles while playing in all 15 games as a backup, insists there is more than enough talent ready to take over on the defensive front. Among other returning players are Jalen Carter, Tymon Mitchell and Bill Norton.

“Our room is loaded, man,” Logue said. “We can go out and play with any guy in our room right now."

Right guard Warren Ericson, one of three returning starters on the offensive line, also says there won't be a dropoff on this year's defensive front.

“We have another great line this year,” said Ericson, who has worked against Logue and others in practice.

Georgia must replace 14 starters, including eight on defense. Quarterback Stetson Bennett is returning as he takes advantage of the NCAA’s “Super Senior” added year of eligibility granted in 2020 because of the pandemic.

The only returning starters on defense are outside linebacker Nolan Smith and defensive backs Kelee Ringo and Christopher Smith.

A top returning starter, tight end Brock Bowers, will miss spring practice while recovering from shoulder surgery. Linebacker Rian Davis and tight end Darnell Washington also will miss spring drills but all are expected to be ready for the season.