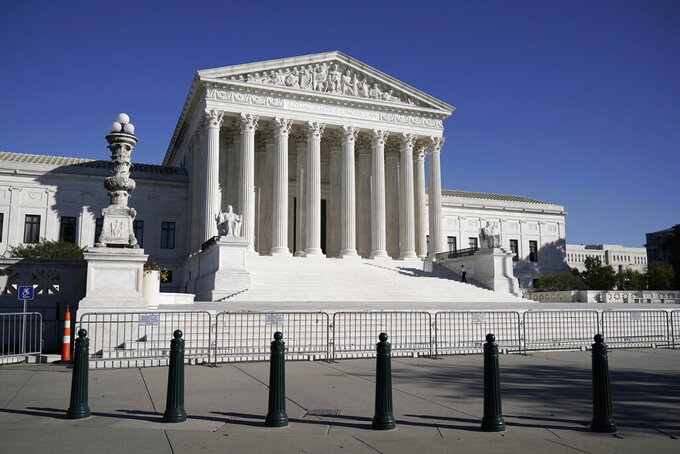 WASHINGTON (AP) — For the first time in more than three decades, the Supreme Court will hear a case involving the NCAA and what it means to be a college athlete.

The high court on Wednesday agreed to review a court decision in an antitrust lawsuit the NCAA has said blurred “the line between student-athletes and professionals" by removing caps on compensation that major college football and basketball players can receive.

The case will be argued in 2021 with a decision expected before the end of June. The last time the Supreme Court heard an NCAA case was 1984. NCAA vs. the Board of Regents of the University of Oklahoma changed the way college football could be broadcast on television, setting the stage of billion-dollar media rights contracts and conference realignment.

“That was a shape-shifting decision that in many ways fundamentally changed economics of college football and college football television,” said Gabe Feldman, director of the sports law program at Tulane. "And ever since that 1984 decision, courts have been relying on that language to try to interpret antitrust law applies to all NCAA restrictions, including player compensation.”

The high court's decision to hear the so-called Alston case comes after a three-judge panel of the 9th U.S. Circuit Court of Appeals ruled in May. The panel upheld a lower court ruling barring the NCAA from capping education-related compensation and benefits for student-athletes in Division I football and basketball programs. Division I conferences can still independently set their own rules.

The case was brought by former West Virginia football player Shawne Alston and others.

The narrow ruling in the case, which required any compensation to athletes to be tethered to education, left both sides claiming victory at the time.

And now both sides are celebrating the decision by the Supreme Court to hear the case.

Donald Remy, the NCAA’s chief legal officer, said in a statement that the NCAA is pleased the court will review the case. “The NCAA and its members continue to believe that college campuses should be able to improve the student-athlete experience without facing never-ending litigation regarding these changes,” Remy said.

Jeffrey Kessler, the lead attorney for the plaintiffs, said: "It is time for the Supreme Court to reaffirm that the big multibillion-dollar businesses of Division I basketball and FBS football are fully subject to antirust review and that the era of exploiting the athletes who provide the labor in these businesses must come to an end.”

In August, Justice Elena Kagan had denied the NCAA’s request to put lower court rulings in favor of athletes on hold at least temporarily while the NCAA formally petitioned the Supreme Court to take up the case.

The NCAA had said the ruling “effectively created a pay-for-play system for all student-athletes, allowing them to be paid both ‘unlimited’ amounts for participating in ‘internships’” and an additional $5,600 or more each year they remain eligible to play their sport.

The NCAA is in the process of changing its rules to permit athletes to be compensated for the use of their names, images and likenesses. That should open opportunities for athletes to be paid for endorsement and sponsorship deals, for appearances and for promoting products or events on social media accounts.

NCAA's bylaws regarding NIL compensation are on course to be changed as soon as January, but the association is unlikely to have the last word on that matter: Dozens of states have passed or are working on bills that would make it impossible for the NCAA to restrict athletes from earning money from their fame. Florida's could be first to go into effect this summer.

The NCAA is looking to Congress for help in the form of a federal law that would supersede state laws, create uniform rules for NIL compensation and protect the association from further antitrust challenges.

Now the Supreme Court will weigh in, too.

“This case, and I don't think it's overstating it, depending on how it is decided could fundamentally change the structure of college sports and the relationship between college athletes and their schools and conferences,” Feldman said. “It could open the door to significant competition between schools for athletes' services, and ultimately allow schools to pay anything they want to try to attract the athlete. Or it could completely shut down that competition.”

The high court took one other case Wednesday. It involves a class-action lawsuit against the credit reporting service TransUnion. A jury awarded a group of over 8,000 people more than $60 million after the credit reporting service flagged their accounts as belonging to people designated by the government as terrorists, drug traffickers, and other threats to national security. An appeals court later reduced the amount to $40 million. TransUnion has appealed.