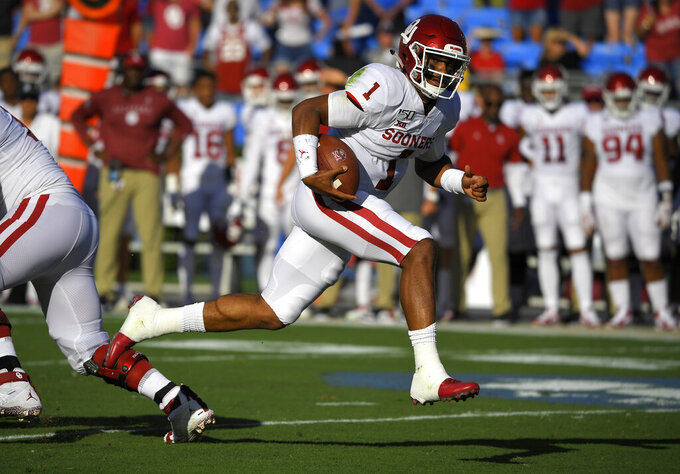 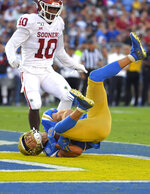 PASADENA, Calif. (AP) — Lincoln Riley and Jalen Hurts sent the Big 12 a message in fifth-ranked Oklahoma's 48-14 victory over UCLA on Saturday night at the Rose Bowl.

Despite 611 yards of offense — including 439 coming courtesy of Hurts — the Oklahoma coach and quarterback are far from satisfied going into an off week before opening conference play.

"I think we're headed in the right direction," said Hurts, who became the first Oklahoma quarterback to pass for 200 yards and rush for 100 in the first half. "The intent for us is coming out and playing a complete game. I don't think we did it tonight. We can improve."

The graduate transfer from Alabama led the Sooners to six touchdowns and a pair of field goals in 10 drives. He completed 15 of 20 passes for 289 yards and three touchdowns and ran 14 times for 150 yards and a score.

"He played pretty good. He made the majority of plays that he was supposed to make and then a few where he made a couple off script that were important plays," Riley said of Hurts. "He took some steps from the last couple of weeks. It's a laundry list of things to get better at, and that is how I will approach it with him."

CeeDee Lamb and Charleston Rambo each had two touchdowns to help the Sooners (3-0) win their 21st straight true road game. That is tied with Alabama (1970-75) the second-longest away streak after World War II.

UCLA drops to 0-3 for the second straight year. Dorian Thompson-Robinson passed for 201 yards and two touchdowns.

Hurts rushed for 99 yards on four carries during the opening drive. The Sooners started on their own 11 after a short kick return, but it didn't matter as Hurts went around left end on the opening play for a 52-yard gain . He then completed the five-play drive with a 30-yard run up the middle for a touchdown. He gained 103 rushing yards in the first quarter, topping Jamelle Holieway's 98 in a 1985 game vs. Missouri.

Hurts added a 32-yard touchdown pass to Lamb with 3:31 remaining in the quarter to extend the Sooners' lead to 17-0. Oklahoma had 258 yards of offense in the first quarter, which was the second-most in an opening quarter in school history.

Midway through the second quarter Hurts connected with Charleston Rambo for a 49-yard score to extend the lead to 27-7. On both TDs, Hurts rolled to the right of the pocket to give the receivers more time to get open. The Sooners gained 15 or more yards on 13 of their first 31 plays.

"Everything isn't going to go how you draw it up but how do you respond to that adversity. I thought some positive steps were taken," Hurts said.

Rambo, who had five receptions for 116 yards, also had a 39-yard TD reception late in the third quarter.

Kyle Philips put UCLA on the board early in the second quarter with a 13-yard TD catch to bring the Bruins within 17-7. UCLA would not score again until the opening drive of the third quarter when Jaylen Erwin capped a 14-play possession with an 8-yard reception.

The Bruins have lost 12 of 15 games under second-year coach Chip Kelly, who is already facing plenty of heat for the poor start to his tenure.

"It's times like this when you're facing adversity that you have to stick together as a group. You can't certainly fray as a group because it just gets worse," he said. "But I'm confident that that group will stick together. They're just young, so this is all a new experience for them, but we have to grow from that experience."

Hurts' 141 rushing yards in the first half also are a school record. The previous record was 128 by Hurts and Holieway.

Hurts also is the first Big 12 quarterback with 100 or more rushing yards in the first quarter since Texas' Vince Young in 2005 according to ESPN Stats and Info.

The announced crowd at the Rose Bowl was 52,578, with most of them cheering for Oklahoma. Reilly said he was surprised at how well the fans traveled from halfway across the country.

"We do have a lot of fans who traveled, and to see all those who came out and supported us when you are half a country away is pretty cool," he said.

With his 1-yard run around left end during the second quarter, Lamb is the first Oklahoma player since Brandon Daniels (1996-99) to have a receiving, rushing and passing TD in a career.

Lamb, who has 21 touchdown catches, had his lone TD pass in the 2018 College Football Playoff semifinal against Georgia, which was also at the Rose Bowl. Lamb had a 2-yard toss to Baker Mayfield.

Oklahoma: The Sooners were expected to roll to an easy win, but Hurts continues to put up amazing numbers. Oklahoma has scored on 19 of 27 possessions with Hurts at the controls with all but two being touchdowns. They have gone three-and-out just twice.

UCLA: The Bruins, who came into the game last in the nation in time of possession, had their first drive of over 10 plays and five minutes on the opening drive of the second half.

Oklahoma: Has next week off before opening Big 12 play on Sept. 28 against Texas Tech. The Sooners have won the last seven meetings and have scored at least 38 points in their last nine meetings against the Red Raiders.

UCLA: Travels to Washington State next Saturday for its first Pac-12 game this season. The teams last played in 2016 when the Cougars prevailed 27-21.