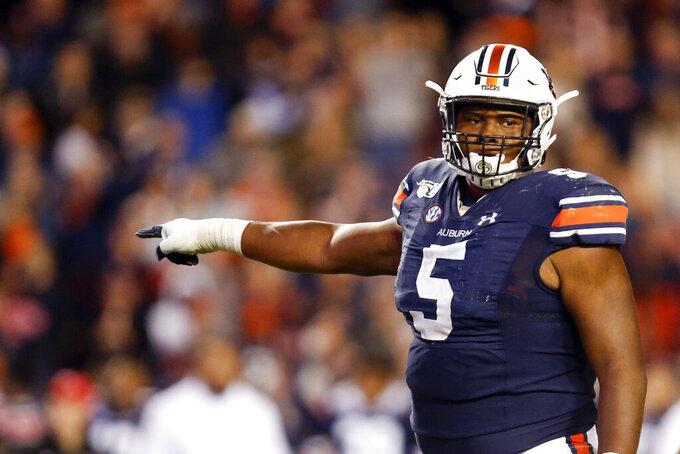 AUBURN, Ala. (AP) — Alabama coach Nick Saban turned some heads this week when he lavished praise on Auburn.

“So, this is the best team we’ve played, probably, so far this year, and it will be the most challenging place that we’ve played,” Saban said.

The latter is likely true. No. 1 LSU would probably like a word about the “best team” point, however.

The fifth-ranked Crimson Tide visits No. 16 Auburn Saturday with its playoff hopes on the line, and no guarantees even with an Iron Bowl win.

The reason for that precarious position and why that Saban comment got some attention: LSU, which won close games against both the Tide and Auburn.

That leaves Alabama (10-1, 6-1 Southeastern Conference, No. 5 College Football Playoff) fifth in the playoff rankings and far from a sure thing even with a win over Auburn (8-3, 4-3, No. 15 CFP). The sure thing is that a loss would eliminate ‘Bama from playoff consideration — in addition to giving Auburn fans a yearlong supply of bragging rights.

A dominant win could at least give Alabama a stronger case for the selection committee if one of the top four teams loses. Tide linebacker Anfernee Jennings said that doesn’t necessarily require a mind-set change.

“We want to win big every week,” Jennings said. “We want to dominate, nothing's changed. We want to go out there and do our jobs and bring home the ‘W.’”

The matchup of Alabama’s high-flying offense against Auburn’s stingy defense lost some of its luster with the season-ending hip injury to Tide star Tua Tagovailoa.

It’s still one to watch. The Tide and LSU are both averaging a league-best 48.5 points per game. Auburn and Alabama share the third spot in scoring defense, giving up 16.2 points per game. LSU scored just 23 against Auburn.

Some other things to know about Saturday’s Alabama-Auburn showdown:

Auburn had risen as high as No. 7 in the rankings at midseason but wasn’t able to get over the hump against three of the four Top 10 opponents. A win over Alabama would have a big effect on perception of the Tigers’ season.

Auburn freshman Bo Nix didn’t expect to be the most experienced quarterback in the Iron Bowl. But Alabama’s Mac Jones has only made two starts, both at home against overmatched opponents.

“They've shown no (signs) of slowing down,” Brown said. “It's a powerful offense. He's in there and he gets the ball out. High-powered wide receivers that make a lot of plays, and they make plays after the catch. That's something that we've got to be able to limit.”

Auburn’s matchup with the Tide’s dangerous receivers gets even more challenging in the first half. Defensive back Jamien Sherwood will have to sit the half out because of a targeting foul in the Samford game. Sherwood is a backup safety but has 40 tackles and five pass breakups.

If Auburn has an edge, it might just be in the quality of competition. LSU is the only other currently ranked team Alabama will have faced. The Tigers have faced LSU, No. 4 Georgia, No. 8 Florida and No. 14 Oregon. They beat the Ducks and had chances in the fourth quarters of the other games. All four opponents were in the Top 10 at the time.

“This will be our fifth Top 10 opponent, so the good thing is it won’t be a shock to our system,” Malzahn said. “And really hoping that will be an advantage for us.”

Don’t leave your seat during punts. Alabama’s Jaylen Waddle is the nation’s top punt returner and Auburn’s Christian Tutt ranks fourth. Waddle especially has been explosive, with a 77-yard return for a score and a 24.9-yard average.

Tutt is fourth nationally with a 13.8-yard average per return.