It's Daniels vs. Daniels as Kansas, WVU start Big 12 play 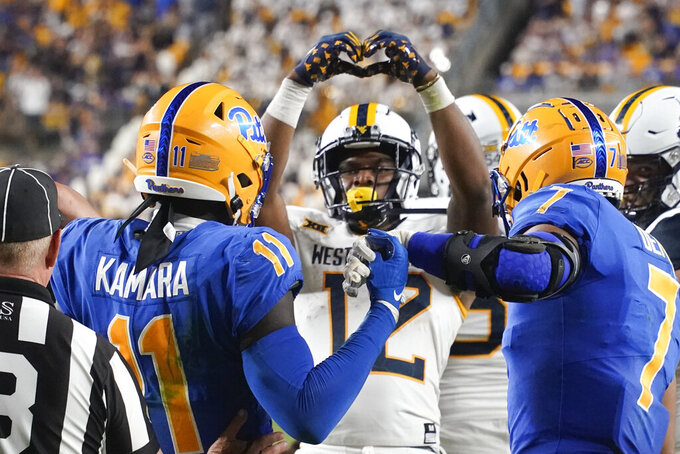 Line: West Virginia by 13 1/2, according to FanDuel Sportsbook.

Kansas and West Virginia get an especially early start to the Big 12 schedule and they are the only head-to-head matchup between league teams this weekend. West Virginia, the only Big 12 team to lose its first game this season, will try to get a critical season for fourth-year coach Neal Brown on track. The Mountaineers led Pittsburgh 31-24 before giving up a pair of fourth-quarter touchdowns. Kansas is looking for its first 2-0 start since 2011, which would match its win total for all of last season.

West Virginia LB Lee Kpogba vs. Kansas RB Devin Neal. Kpogba (pronounced KOH-buh) spent two seasons as a reserve at Syracuse, then one season at a community college in Mississippi. He led the Mountaineers with 10 tackles and a fumble recovery last week. Neal ran for 108 yards on just four carries while the Jayhawks piled up 297 rushing yards in their opening 56-10 win over Tennessee Tech of the Championship Subdivision.

West Virginia: RB CJ Donaldson. The 240-pound freshman ran for 125 yards on just seven attempts, ripping off a 44-yard run in his first college carry. Donaldson also blocked a Pittsburgh punt to set up his own short touchdown run. He’ll face a Kansas defense that held Tennessee Tech to 2.2 yards per rush.

Kansas’ 56 points were the most in a Jayhawks opener since 1912 ... West Virginia quarterback JT Daniels will make his Big 12 debut after playing at Georgia the past two seasons and at Southern Cal in 2018 and 2019. ... Kansas starting wide receiver Trevor Wilson remains suspended after he and backup Tanaka Scott were arrested last month near campus. Scott will be available for Saturday's game. ... The Jayhawks' only victory in the series was in 2013 at home. ... West Virginia wide receiver Bryce Ford-Wheaton had nine catches for a 97 yards and two TDs against Pittsburgh. A fourth-quarter pass that went through his hands was intercepted and returned for a touchdown, which was the game's final margin. ... West Virginia has won 18 straight home openers.