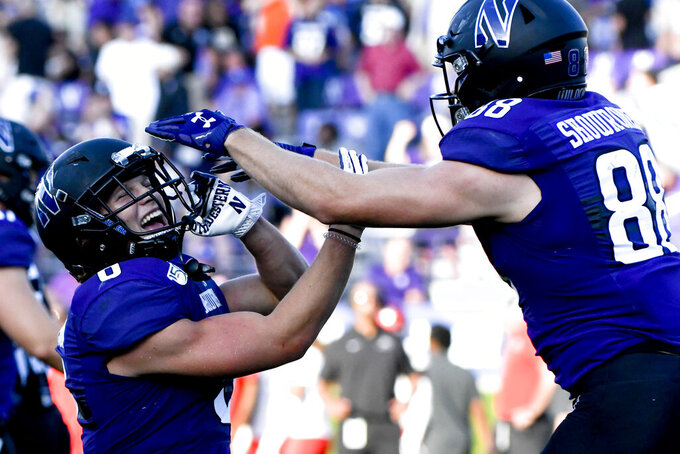 EVANSTON, Ill. (AP) — Hunter Johnson only needed a few minutes to wash a bad start out of his mind.

He and his Northwestern teammates can use all the confidence they can get with a huge Big Ten test looming.

Johnson threw his first career touchdown pass and ran in another Saturday afternoon to lead Northwestern past UNLV, 30-14.

Drake Anderson ran for 141 yards and a touchdown to help the Wildcats win their home opener.

"That first drive was a big confidence-booster for all of us today," said Johnson, who ended the first drive of his second career start with a 1-yard touchdown run. "It was a good momentum booster."

Johnson and the Wildcats' offense needed the boost after a lackluster season opener.

Charles Williams had scoring runs of 65 and 37 yards in the first half and ended the day with 144 on 16 carries as the Rebels (1-2) dropped their second straight.

Up 16-14 at the break, Northwestern (1-1) gave itself some breathing room late in the third quarter when Johnson found a streaking J.J. Jefferson for a 50-yard touchdown. The sophomore quarterback was 12 for 25 for 165 yards with an interception. The effort came two weeks after he struggled in his first collegiate start, a loss at Stanford marked by an offense that often sputtered.

Two of UNLV's three second-half turnovers led to Northwestern touchdowns. Johnson's throw to Jefferson came a drive after the Rebels fumbled at the Wildcat 35.

The second score, Anderson's 7-yard run in the final two minutes, put the game away.

Rebels quarterback Armani Edwards, criticized by coach Troy Sanchez after last week's loss, was 16 for 26 for 120 yards and an interception. He was sacked five times in the second half.

Northwestern kept Williams off the ends in the second half and was much more aggressive up front after the offense gave it a two-score advantage.

"That forced UNLV to go into drop-back passes," defensive end Joe Gaziano said. "I think there were only a couple plays in the first half where they actually had a true five-step, so for us it was great to be able to get into our pass rush and execute what we want to do."

Williams, who recorded his third straight 100-yard game, managed just 12 positive yards in the second half as UNLV tried to rally back with its passing game. Still, Sanchez saw enough to like from his starter.

"Armani looked like a whole other guy," he said. "He was comfortable. He was poised.

"I was really proud of his performance; especially bouncing back from a week ago."

The teams traded touchdowns on their opening possessions but the Wildcats took the lead at intermission thanks to three Charlie Kuhbander field goals.

Northwestern lost another running back Saturday afternoon when Jesse Brown missed the second half with what Fitzgerald called a lower-body injury. It ended a promising day for the junior, who saw more carries because leading rusher Isaiah Washington was inactive due to an injury suffered in the opener.

Brown amassed a career-best 79 yards on nine first-half carries. It opened an opportunity for Anderson, who racked up 91 yards in the second half to compliment his first career scoring run.

UNLV safety Drew Tejchman was ejected late in the first half after drawing a targeting penalty on an open-field tackle. A replay showed Tejchman striking Bennett Skowronek's helmet with the crown of his own after the Northwestern receiver made a first-down catch.

Because the foul took place in the first half, Tejchman will be eligible to start the Rebels' next game.

UNLV: The Rebels get a week off before opening Mountain West play and can use it to work on a passing game that showed diminishing returns for the second straight weekend. The Rebels ran up 189 yards on the ground in the first 30 minutes but struggled to find any balance in the second half as the Wildcats dared Rogers to beat them with his arm.

Northwestern: Johnson walked off the field with his first career touchdown pass and might've had a couple more if not for narrow misses by receivers. The Wildcats will need the sophomore's best Saturday when they welcome No. 18 Michigan State and its stingy run defense for both teams' Big Ten opener.

"We're going to play the best rush defense in the country next week so our hands are going to be full," Wildcats coach Pat Fitzgerald said. "We need to be efficient."

A victory would be Northwestern's fourth straight over the Spartans, who fell to Arizona State in their final pre-conference tuneup Saturday.