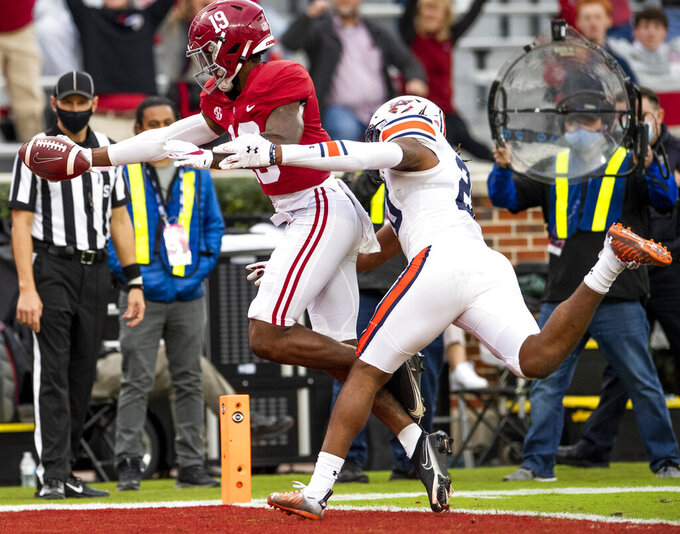 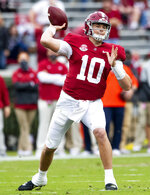 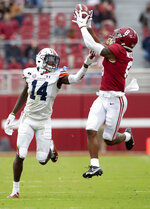 TUSCLAOOSA, Ala. (AP) — Once the Iron Bowl kicked off, Nick Saban was just another passionate, heavily invested fan who was powerless to help his team win.

Mac Jones passed for 302 yards and a career-high five touchdowns, highlighted by two long ones to DeVonta Smith, and No. 1 Alabama rolled over rival No. 22 Auburn 42-13 on Saturday without Saban.

The Crimson Tide (8-0, No. 1 playoff rankings) continued a dominating march through a schedule of all-Southeastern Conference games even minus its six-time national champion coach on the sideline.

Saban said his staff “did a marvelous job.”

“Sark did a nice job of managing things, and I sat here and felt a little helpless," he said in a postgame zoom from his home. "I could see things and yell at things and listen to (wife) Miss Terry yell downstairs. It’s a little different. It still feels good to win.”

The result was much of the same against the Tigers (5-3), who suffered the second-most lopsided loss of Gus Malzahn's coaching tenure. The only bigger margin was Alabama's 52-21 win in the 2018 Iron Bowl.

“They’re a very, very talented team,” Malzahn said. “We knew that. Still we came in here with the mindset that we wanted to win the game. To beat a team like that on the road, you’ve got to make plays. We didn’t do that. We didn’t play our best. It’s obvious.”

Alabama started a string of three straight touchdowns with Jones's 66-yard touchdown to Smith, who was streaking by himself downfield after Auburn defenders bit on a double move. He later added a 58-yard catch and run on a quick slant, sprinting away from the Tigers.

Smith had seven catches for 171 yards. Najee Smith ran for 96 yards, including a 39-yard touchdown, and John Metchie III caught a pair of scoring passes.

“Not having Coach Saban is difficult and obviously he did a great job preparing all of us for a situation like this," Jones said. "It was clear we were prepared for this situation."

Bo Nix passed for 227 yards and ran for a late touchdown for the Tigers, but also threw two interceptions.

Saban, meanwhile, couldn't talk to his team starting 90 minutes before kickoff though he still led the preparation during the week. He spoke to the media in his home's “recruiting room,” filled with Alabama memorabilia, including an elephant head on the wall and a pool table with a crimson playing surface.

“That was really hard, especially the fact that I feel great," the 69-year-old said.

Auburn: Managed a solid 347 total yards but had some missed opportunities. The Tigers had to settle for three long field goal attempts by Anders Carlson, who made kicks of 45 and 47 yards. Star receiver Seth Williams, who's from nearby Cottondale, dropped a sure touchdown, too.

Alabama: Continued its strong defensive play of late, having given up 33 points in its last 18 quarters dating back to halftime of the Georgia game. Got revenge for a 48-45 loss last season.

Smith has been on fire since fellow star wide receiver Jaylen Waddle's season-ending injury. He has 27 catches for 518 yards and eight touchdowns in the past three games. Smith also helped perhaps motivate his quarterback by showing him a comment from Nix calling Jones “a game manager.”

“It was just funny seeing that,” Smith, who was playing his final game at Bryant-Denny Stadium, said.

Alabama was already a unanimous No. 1 and didn't do anything to diminish its standing. Second-ranked Notre Dame beat No. 25 North Carolina 31-17 Friday night. Auburn could fall out of the rankings with the loss.

Malachi Moore's interception of Nix late in the first half was his third of the season. He's the first Alabama freshman with multiple picks since 2015 when Minkah Fitzpatrick, Ronnie Harrison and redshirt Marlon Humphrey all did it.

Alabama: At defending national champion LSU, one of two teams to beat the Tide last season, in a makeup game Dec. 5.