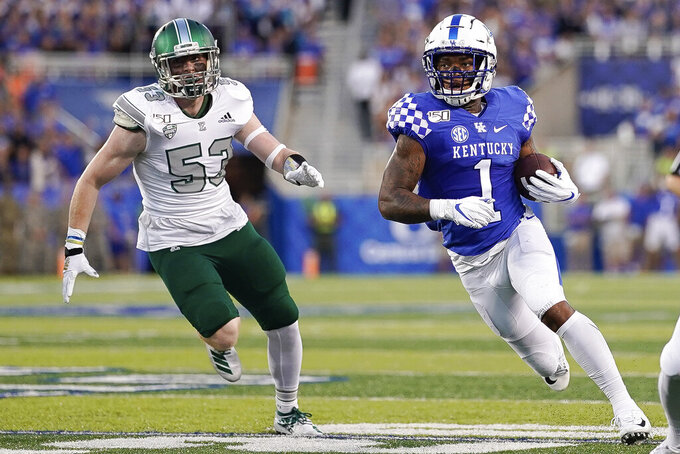 Kentucky wide receiver Lynn Bowden Jr. (1) runs with the ball during the first half of an NCAA college football game between Kentucky and Eastern Michigan, Saturday, Sept. 7, 2019, in Lexington, Ky. (AP Photo/Bryan Woolston) 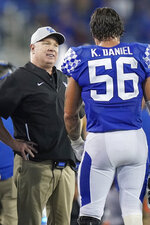 LEXINGTON, Ky. (AP) — Sawyer Smith hurriedly tossed the football to a Kentucky teammate as medical personnel tended to quarterback Terry Wilson while he lay on the turf with an injured left leg.

Wilson was soon carted off to cheers, raising his right arm as he left the field. His backup then rose to the occasion to seal the game.

Smith threw two touchdown passes in relief of the injured Wilson, who rushed for a TD before hurting his leg, and Kentucky rolled past Eastern Michigan 38-17 on Saturday night.

Wilson's 2-yard TD run in the third quarter put the Wildcats (2-0) up 24-3 before he was carted off later with the injury following a horse-collar tackle by EMU defensive lineman Turan Rush, who was flagged on a play with offsetting penalties (Kentucky was flagged for illegal formation). Wilson exited after teammates offered supportive handshakes.

Kentucky coach Mark Stoops said Wilson would have an MRI on Sunday but added, "it doesn't look good."

Said Eagles coach Chris Creighton, "There is not a single guy that does not feel bad about him (Wilson) being hurt. We send our thoughts and prayers to him."

Smith, a junior transfer from Troy, came in and hit Ahmad Wagner for a 54-yard touchdown and Lynn Bowden for the final 2-yard TD with 54 seconds remaining. A.J. Rose and Kavosiey Smoke rushed for TDs of 8 and 32 yards, respectively, in a game the Wildcats led throughout.

EMU never got closer than 14 points as Smith maintained a safe cushion. Not to mention, perspective about his status.

"We have each other's backs," said Smith, who completed 5 of 9 passes for 76 yards. "I can't say enough about what kind of a person Terry is. He's one of the good guys. I came here to be a backup. I knew I was going to be a backup and was fine doing that.

"I'm glad they called some running plays to kind of get me going and then cut me loose a bit."

Kentucky outgained the Eagles (1-1) 461-386, including a 239-49 rushing edge. But the Wildcats committed seven penalties for 84 yards, several of which snuffed first-half chances to put the game out of reach.

"There's just a lot of things we could clean up, and we will," Stoops said. "I know we can be a lot better and that's a good thing."

Kentucky passed up a chance for two points on a safety when EMU was called for offensive holding in the end zone in the second quarter. Jordan Griffin intercepted Mike Glass III on the play and returned the ball to set up the Wildcats at the 11-yard line, leading Stoops to decline the penalty and points in hopes of a touchdown and possible 21-0 lead. The drive stalled but Kentucky still came out ahead as Chance Poore kicked a 40-yard field goal.

Eastern Michigan: The Eagles were never in this game because they couldn't stop Kentucky's offense. Glass hit Line Latu and Bryson Cannon for TDs and surpassed 300 yards, but he also threw two interceptions and was sacked twice before halftime. This followed a near-perfect opener in which he completed 20 of 22 passes for 188 yards with three TDs. And it spoke volumes about how Kentucky's defense pressured him and stifled the run game.

"They were some solid guys, they had talent all around," said Glass, who led EMU with 35 yards rushing on 10 carries. "It was just more of a passing game for us. We didn't take our chances when we had them."

Kentucky: Wilson's status was the big concern, though the Wildcats have others after struggling for several stretches. The Wildcats achieved their goal of starting quicker with two first-quarter TD drives, but a ragged second quarter featuring Rose's fumble at the EMU 1 and penalties that hurt two other possessions killed chances to put it out of reach early.

Kentucky hosts No. 11 Florida on Saturday night, seeking its first home win against the Gators since 1986 and first series winning streak since 1976-77.