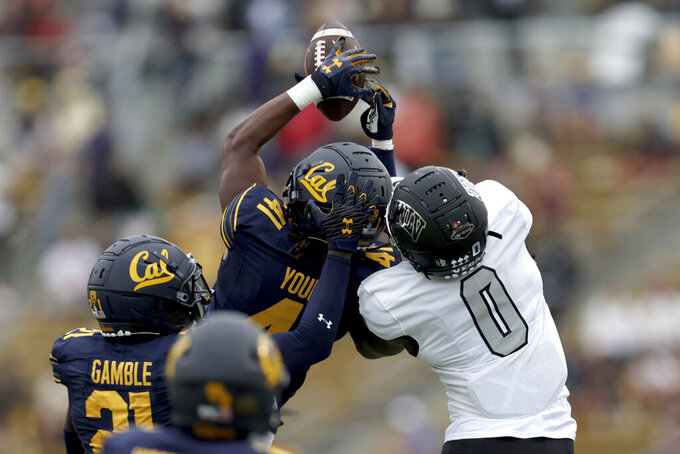 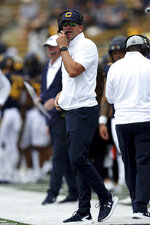 BERKELEY, Calif. (AP) — Jaydn Ott scored two touchdowns, one on the ground and one through the air, and California’s defense stiffened late to lead the Bears to a 20-14 victory over UNLV on Saturday.

Cal (2-0) made three fourth-down stops in the second half, including a fourth and goal opportunity for the Rebels from the Cal 8 with 2:46 remaining that preserved Cal’s six-point lead.

UNLV got the ball back one more time with 1:03 remaining, but Isaiah Young intercepted UNLV quarterback Doug Brumfield deep in Cal territory on the game’s final play. That clinched the Bears’ first 2-0 start since 2019 as they turn their attention to next week’s game at Notre Dame, the marquee opponent on Cal’s schedule.

“I think it’s huge for us, giving us a little bit of confidence and momentum going into a tough game,” Cal safety Daniel Scott said. “We’ve got to keep building. At the end of the day, we’re 2-0 and that’s the best part about it.”

Jack Plummer threw for 278 yards and a touchdown as the Golden Bears got off to a fast start on offense. But after taking a 20-7 lead on a Dario Longhetto field goal midway through the third quarter, Cal’s offense stalled and UNLV (1-1) grabbed momentum.

Aidan Robbins rushed for 84 yards for UNLV, including a 31-yard score in the third that brought the Rebels to within 20-14.

Three times Cal drove to UNLV’s 10-yard line or deeper and didn’t get touchdowns. The Bears settled for two field goals and Plummer was intercepted on the third drive.

“The goal, No. 1 , is to win the game, and it carries more weight than any other goal,” California coach Justin Wilcox said. “We also recognize where we need to be better.”

After being held to minus-1 yard of offense in the first quarter last week against UC Davis, the Bears led 14-0 after the first on Saturday. Plummer completed his first eight passes and found open receivers against a UNLV secondary that also was called for pass interference three times in the game.

Ott scored on a 2-yard run and added a 12-yard touchdown catch later in the first, taking a short pass in the flat and making a leaping dive into the end zone on fourth-and-2 to give Cal a 14-0 lead.

Kyle Williams got UNLV on the board with an 11-yard touchdown catch on the first play of the second quarter, but Dario Longhetto’s 20-yard field goal gave Cal a 17-7 lead at halftime.

UNLV coach Marcus Arroyo did not hide his disappointment after the game.

“We let that one get away,” Arroyo said. “We’ve got a locker room full of guys right now that are disappointed we didn’t finish that game. You’ve got to capitalize against quality opponents.”

UNLV: The Rebels showed heart in battling back from a 13-point deficit against a Power-5 opponent, but when they had a chance to score the go-ahead touchdown, they had no answer for Cal’s pass rush.

California: Plummer had the Bears rolling early, but they failed to put the game out of reach when their offense began bogging down in the second half.

After UNLV marched to Cal’s 8 late in the game and looked poised to score a go-ahead touchdown, Scott blitzed on both third and fourth down to pressure Brumfield into incomplete passes on the game’s deciding drive.

“Daniel has been a playmaker for us for a while here, and he made a couple big plays,” Wilcox said of his senior safety.

After catching 8 passes for 182 yards in a season-opening win against Idaho State, UNLV receiver Ricky White was held to four catches for 59 yards Saturday and wasn’t a major factor.

Cal’s game at Notre Dame next week will mark the first meeting between the teams in 55 seasons.

“I think maybe in the spring or summer, some guys maybe talked about it more than some other games,” Scott said. “But we’re definitely a week-by-week team. Now it’s week 3 and we’ve got Notre Dame.”