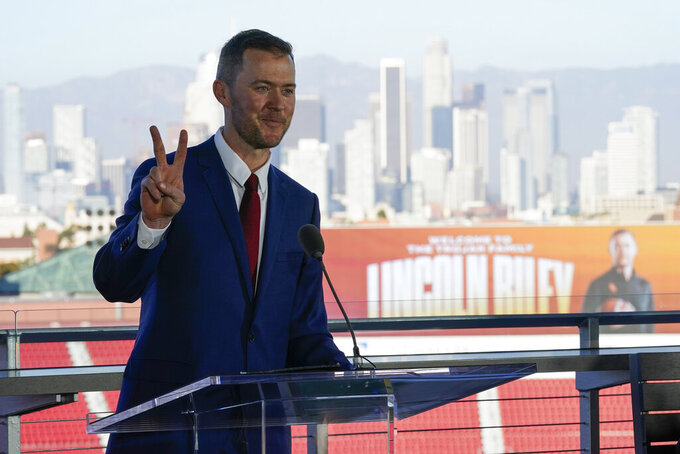 LOS ANGELES (AP) — Standing on the top rim of the venerable Coliseum on a 76-degree autumn Monday, Lincoln Riley took a glance behind him at the Los Angeles panorama stretching from the Pacific Ocean to the Hollywood sign to the gleaming downtown skyscrapers.

Southern California appeared to be asking itself the same rhetorical questions after a surprising 36-hour courtship ended with Riley in charge of restoring the Trojans to a place atop the college football world.

Riley arrived in sunny Los Angeles one day after he agreed to leave Oklahoma following five successful seasons in charge. He addressed his new players on campus before receiving his official welcome at the Coliseum in what he called “a surreal moment.”

“It was tough to leave the place I was,” Riley said. “At the same time, I knew this was the right thing.”

The respected 38-year-old coach who went 55-10 and won four Big 12 titles with the Sooners said he didn't hesitate when forced to make a swift decision to join the Trojans, who expressed their fervent interest in him shortly after he arrived home Sunday morning from Oklahoma’s narrow loss to Oklahoma State.

“I call plays in a lot less than a day, and those are life-changing decisions, too,” Riley said. “This one felt like I had an eternity.”

Riley said he never spoke to any other school about its opening, and he insists he was happy in Norman. But the opportunity presented by this new challenge on the West Coast was too fascinating to resist.

“My intentions were certainly not to leave Oklahoma,” Riley said. “They weren't. Just the more I learned about this, the more my excitement built. It just felt like the right place at the right time for the next chapter in my life, my family's life. Is there a little bit of shock, even now? Yeah, I think there is. But the excitement outweighs that.”

Riley declined to say whether he thought he had a better chance to win a national championship at USC than at Oklahoma, which is headed to the SEC within a few years.

“I don't want to compare,” Riley said. “I think we had our chances and we were darn close there, and if we do what we should here, we'll have chances here.”

A long-proud football school mired in a decade-plus of disappointment and embarrassment celebrated the arrival of Riley, who was attracted by his new school’s history, alumni base, facilities and the recruiting opportunities in talent-rich Southern California.

He also took an immediate shine to the venerable Coliseum, which was packed with fans during Pete Carroll’s tenure before the past 12 years of decreasing success.

Athletic director Mike Bohn effusively praised his new hire, calling Riley “our top candidate and one of the best coaches in all of football.”

“It says that USC is the premier destination for the best and brightest,” Bohn added. “It sends a loud and powerful message to the college football world that this sleeping giant is wide awake, standing up and fighting on.”

USC (4-7, 3-5 Pac-12) finishes its second losing season in four years at California on Saturday night, and Riley plans to spend this week “working in the shadows” to avoid being a distraction to interim coach Donte Williams' team. A loss would leave the Trojans with their first eight-loss season since 1991, but their roster is still studded with elite talent — and Riley knows a few things about both recruiting top players and improving veterans.

Riley declined to make any promises about when the Trojans will be title contenders in the Pac-12 or the country, but left little doubt about his expectations.

“In this day and age, I think it can happen quickly,” Riley said. “There’s a lot of good things going on in this program right now that we can build on. You can turn over rosters in a lot of ways, and we’ll be very creative and intentional about that.”

Although he expressed admiration for the work of USC's current staff under difficult circumstances, he didn't commit to retaining any current coaches, including Williams, who's known as one of the West Coast's top recruiters.

“We're obviously going to have a lot of great candidates that want to come and coach with us here," Riley said. “There's several really good ones right here, so I'll visit with those guys.”

Riley also said he was aware of the betrayal felt by people around the Oklahoma program by his abrupt move.

“People are going to say what they say, and I understand that,” Riley said. “I hope they appreciate all the good memories we had there, and what an unbelievable run we had. When I think back on my time there, I'm going to remember all the great things we did there.”

After Riley delivered his opening remarks and the USC band serenaded him once again, he stood up again with Bohn, school president Carol Folt and Rick Caruso, the billionaire chairman of USC’s board of trustees.

As cameras clicked and journalists jockeyed for position around them while he held up a jersey, Riley quipped: “So this is what LA feels like.”