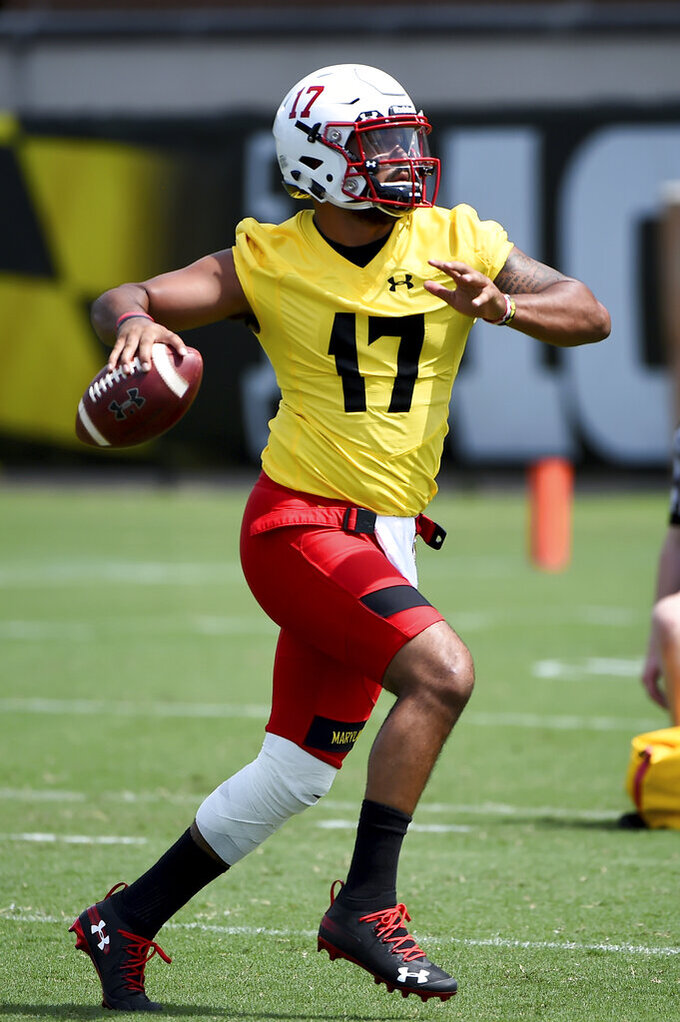 FILE - In this Aug. 2, 2019, file photo, Maryland quarterback Josh Jackson works out during an NCAA college football training camp in College Park, Md. With a new quarterback and a revamped playbook with an Alabama flair, Maryland's offense under first-year coach Michael Locksley has the potential to ring up plenty of points. (AP Photo/Will Newton, File)

COLLEGE PARK, Md. (AP) — With a new quarterback and a playbook that pays homage to Alabama's dynamic attack, Maryland's offense under first-year coach Michael Locksley has the potential to be diverse, exciting and productive.

"This offense has a lot of weapons," said quarterback Josh Jackson, a 6-foot-2, 220-pound junior transfer from Virginia Tech. "We have a chance to surprise a lot of people because we're going to have a great offense."

Jackson will be the starter based on his performance in summer practice and his 2017 season with the Hokies. He threw for 20 touchdowns and ran for six scores at Virginia Tech.

Combine Jackson with 1,000-yard rusher Anthony McFarland Jr., throw in a few speedy receivers and top it all with award-winning tight end Tyler Mabry, and you've got an unit that can strike in a variety of ways.

Locksley and the new-look Terps make their debut Saturday at home against Howard. After spending the past three years helping run Alabama's offense, including last season as the coordinator when the Crimson Tide rang up 45.6 points and 522 yards per game, Locksley can't wait to see how this team fares.

"It's a Maryland offense now," Locksley declared Tuesday. "Obviously, me coming from Alabama as a play caller, the systems will be similar. But you always have to start with evaluating your personnel. If you ask me philosophically, the key is to get as many touches to the best players on offense."

That list begins with Jackson, who last year was on his way to duplicating the success he enjoyed in 2017 before a leg injury cut short his season after three games.

McFarland last year became the first Maryland freshman with four 100-yard rushing games, including a whopping 298 against Ohio State, and he finished with 1,034 yards rushing — most by a freshman in school history.

Receiver Donte Demus Jr. caught three passes for over 50 yards in 2018, and the 6-4, 250-pound Mabry is a sure-handed transfer from Buffalo, where he was named first-team All-Mid American Conference.

Any one of them is capable of going the distance each time they touch the football.

"Coach Lock's offense is designed to get the playmakers the ball in space, and I feel that's what he's going to do," McFarland said. "We have a lot of talent on the offense, a lot of depth. We're ready to showcase that."

A year ago, Maryland's offense was ranked 94th in the Football Bowl Subdivision. This year, McFarland insists, will be different.

"You just won't know what's coming," he said. "Last year we had plays that were hard to stop but we were pretty predictable — at least that's what other teams were telling us. Now we're mixing it up a little bit to keep defenses on their toes, keep them honest."

If it worked for Alabama, it ought to work for Maryland. At least that's what the Terrapins are hoping for.

"It might be coming from Alabama," Jackson said, "but we're going to have our own twist on it and make it very good."