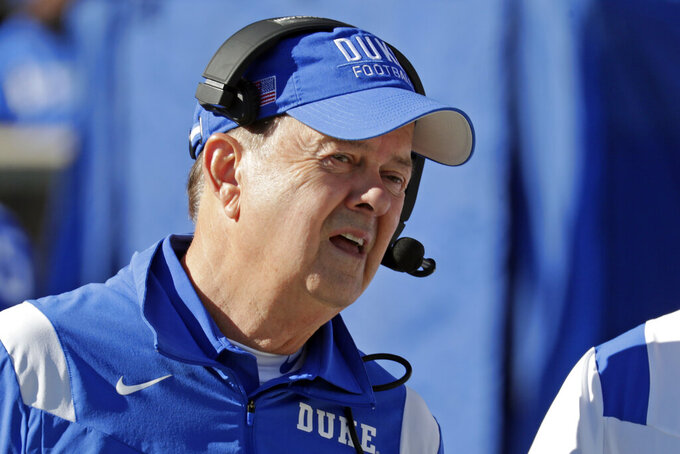 DURHAM, N.C. (AP) — Miami’s turnaround reached all the way to the end of November.

Tyler Van Dyke threw for three touchdowns and 381 yards and the Hurricanes wrapped up the regular season by winning for the fifth time in their last six games, beating Duke 47-10 on Saturday.

“We finished strong,” Miami linebacker Corey Flagg Jr. said. “Our culture, our fight. I’m just so proud of us.”

Charleston Rambo caught two of the touchdown passes on a record-setting day.

Duke (3-9, 0-8), which lost its eighth game in a row, finished with its first winless ACC record since 2007. Its losing streak in conference games is now 13. Duke has won just six of its last 29 games.

While much attention has focused regarding the future of third-year Miami coach Manny Diaz, he liked what he saw from the Hurricanes in their latest game.

“I was really happy with the effort we came out with,” said Diaz, whose record is 21-15.

Miami will finish no worse than tied for second place in the ACC’s Coastal Division.

Duke coach David Cutcliffe said his thoughts were with his players and how they’ve had a challenging two months.

“Just how hard they’ve worked and how disappointed they would be,” he said. “… I’ve got a job to do that’s current right now and that’s where my focus is.”

Rambo, a transfer from Oklahoma, set the single-season school record for Miami with 79 receptions. He passed Leonard Hankerson’s 72 from 2010 in the opening minute of the second quarter on a 12-yard touchdown catch.

In the third quarter, Rambo’s 14-yard touchdown catch set the single-season school record for receiving yards and stretched that mark to 1,172. He finished with 101 on eight catches.

Miami’s Mike Harley set the single-game school record with 13 receptions, racking up 96 yards on those. Van Dyke was 34-for-49.

“When adversity strikes, we kept pushing,” Harley said of how the Hurricanes responded from a 2-4 start to the season.

The big highlight for Duke was Jaylen Stinson’s 94-yard kickoff return for a 10-3 lead.

Duke running back Mataeo Durant became the school’s single-season rushing record-holder at 1,241 yards. He had 68 yards on 22 carries, needing 64 to set the mark.

Blue Devils quarterback Gunnar Holmberg was 20-for-33 for 148 yards with an interception.

This was the third year in a row that the Hurricanes visited Duke, each time in the home finale for the Blue Devils. Last year, Miami rolled 48-0 victory, but Charlie Ham’s 40-yard field goal less than 4 ½ minutes into Saturday’s game meant Duke wouldn’t be shut out again.

Miami: The Hurricanes won away from home for just the second time this season, with the other coming against Pittsburgh, which is the Coastal Division champion. Miami has had seven games decided by four points or less this season, so this seemed like a breather. Their seven previous ACC games had a combined margin of 28 points.

Duke: The Blue Devils have been blowout victims in all except one of its ACC games, a 31-27 home setback to Georgia Tech. Their three November home games have been defined by stellar performances by opposing quarterbacks, with Pittsburgh’s Kenny Pickett and Louisville’s Malik Cunningham running up big numbers before Van Dyke.

Durant broke a Duke rushing record that was set by Steve Jones in 1972. He said he wanted to be the best teammate possible.

“I’m a team player,” Durant said. “Whatever my team needs in the moment, I’m going to do it.”

The senior entered the week second in the ACC in rushing this season. He said he takes pride from his time with the Blue Devils.

“There’s a lot I can take from my experience,” Durant said. “The people at Duke are amazing. They’ve turned me into a better player and a better man.”

Duke: 2022 season slated to begin with a home game vs. Temple