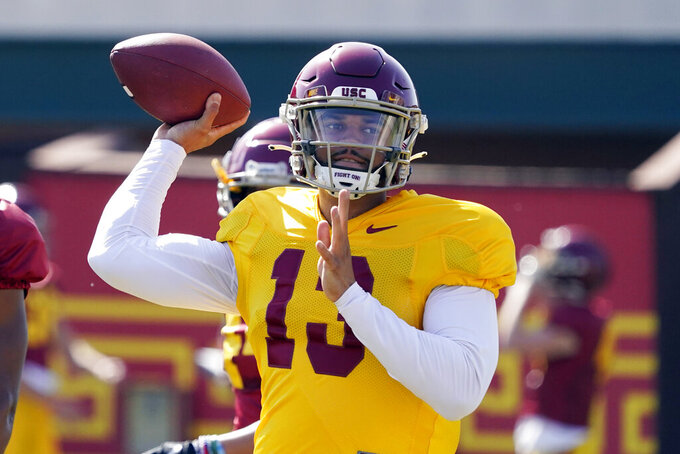 Arizona has two quarterbacks who split time last year, added a transfer from another Pac-12 school and has a freshman who has been turning heads.

The Wildcats have a frontrunner to be the starter but the first game is still more than four months away, so no reason to make any declarations just yet.

“We’re not gonna put a post-spring depth chart out, but as I’ve said to you guys the whole time, we've got ones, twos and threes and you guys are out of practice,” Arizona coach Jedd Fisch said. “There’s so many position groups, you start naming one starter in spring, and then it’s like, well, who’s gonna be the starting back or who’s gonna be the starting receiver?"

Arizona isn't the only Pac-12 school facing a decision at quarterback. More than half the conference's teams have quarterback competitions heading into the 2022 season.

Southern California is set after Caleb Williams, a Heisman Trophy favorite, decided to follow coach Lincoln Riley from Oklahoma. UCLA has Dorian Thompson-Robinson returning, Utah gets Pac-12 offensive player of the year Cameron Rising back and Stanford's Tanner McKee will start for the second straight year.

Washington State picked up one of the best quarterback transfers in the offseason, landing Cameron Ward. He was a second-team FCS All-American after throwing for 4,648 yards with 47 touchdowns as a sophomore at Incarnate Word.

Everyone else has a competition in one form or another.

At Colorado, Brendon Lewis returns, but will be pushed by JT Shrout after an uneven 2021 season. Shrout, a Tennessee transfer, pushed Lewis for the starting job in training camp last season before suffering a season-ending knee injury in fall camp.

Dylan Morris was Washington's starter the past two seasons but is in a battle with Indiana transfer Michael Penix Jr. and top recruit Sam Huard. Penix was a three-year starter at Indiana, but has struggled with injuries. Morris had an up-and-down 2021 season, throwing for 14 touchdowns and 12 interceptions.

Oregon State also has its starter from a year ago back. Chance Nolan threw for over 2,600 yards last season and led the Beavers to their first winning Pac-12 season in nine years, but he will be pushed by Tristan Gebbia. Gebbia is a former starter who has battled shoulder and hamstring injuries.

“I think we’ve got quality quarterbacks,” Oregon State coach Jonathan Smith said. “Everybody, if they take a step in their game, yeah, we believe we can be good.”

Nix was the first true freshman to start the opener at Auburn since 1946 and a three-year starter before opting to transfer to Oregon. A former five-star, dual-threat recruit, Thompson saw limited action in three games as a freshman last season.

Arizona State had one of the Pac-12's best quarterbacks before Jayden Daniels decided to transfer. Now the Sun Devils have an open competition, with Paul Tyson and Trenton Bourguet as the frontrunners.

California has some big shoes to fill with Chase Garbers gone, but picked up former Purdue starter Jack Plummer in the transfer portal. He may have the edge over Kai Millner, who did not play as a freshman at Cal last season.

Arizona also has a Power Five transfer it may lean on.

Jayden de Laura was the 2021 Pac-12 offensive freshman of the year after throwing for nearly 2,800 yards and 23 touchdowns at Washington State. He will have to adjust to a new offense in Tucson after playing the run-and-shoot at Washington State and is being pushed by Jordan McCloud and freshman Noah Fifita.

McCloud, a USF transfer, started two games last season before suffering season-ending leg injuries in October. Though undersized at 5-foot-9, Fifita was impressive in spring ball and could be Arizona's long-term future at quarterback.

“Our team has a really good feel of how, where we’re going with it,” Fisch said. "I think Jayden has certainly proven that he can lead our team. We’ll leave it at that.”

No need for the Wildcats or any other Pac-12 team to rush — yet.