Navy comes from behind on Lavatai TD, upends Tulsa 20-17 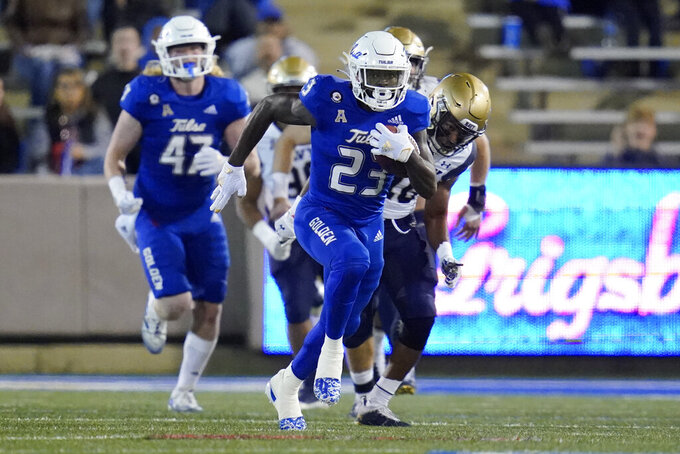 Tulsa running back Anthony Watkins (23) takes off on a 78-yard run in the first half of an NCAA college football game against Navy, Friday, Oct. 29, 2021, in Tulsa, Okla. (AP Photo/Sue Ogrocki)

Lavatai was 0-for-3 passing but gained a career-high 64 yards on the ground, giving him 242 rushing yards and five touchdowns in six starts. The Midshipmen gained 302 yards rushing, zero passing.

The 15-play eight-minute drive in Navy's (2-6, 2-4 American Athletic Conference) come-from-behind win foiled a big night by Tulsa's Anthony Watkins, who scored the Golden Hurricanes first kickoff return for a touchdown in nearly a decade and compiled 178 yards in total offense.

The win was Navy's first on the road this season and broke a three-game losing streak.

Late in the first half, Zack Long kicked a 26-yard field goal for a 3-0 lead as Tulsa salvaged points from a five-play drive that began with a Watkins season-long 78-yard rush to the Navy 7-yard line.

Watkins spun away from a tackler at the line of scrimmage and bolted straight downfield before he was caught. Watkins had 81 yards rushing on five carries.

Bijan Nichols evened the score with a 29-yard field goal for Navy with three seconds left in the first half.

After the Watkins kickoff return, Navy scored after two long drives to tie and take the lead. Nichols added a 46-yard field goal for insurance.

Navy recovered the onside kick and ran out the clock.