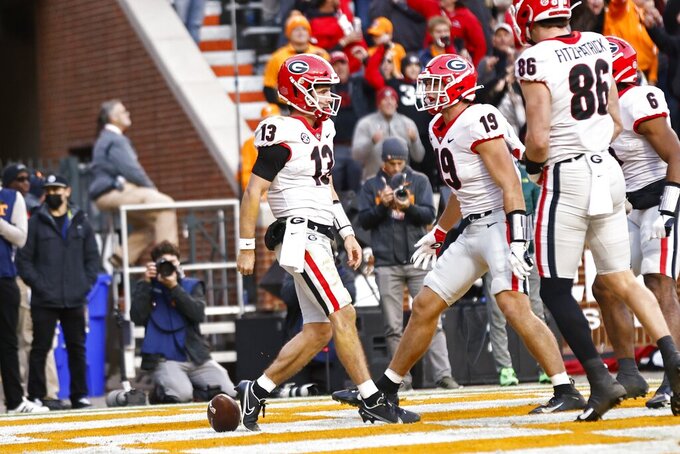 Georgia has completed its first unbeaten conference regular-season record since 1982 and is looking to protect its top ranking in the College Football Playoff. The Bulldogs are expected to use the game to give extensive playing time to backups. While looking to avoid a monumental upset, Georgia’s other main goal is avoiding injuries as they prepare for their Dec. 4 SEC championship game in Atlanta. The FCS Buccaneers are looking for their first win in their 25th game against a FBS team.

Georgia LB Channing Tindall and the rushing defense vs. Charleston Southern RB Danuel Oscar. Georgia ranks second in the nation in rushing defense, allowing 78.1 yards per game. Tindall leads the defense with 53 tackles, including eight stops and three sacks in last week’s 41-17 win at Tennessee. Oscar, a sophomore, isn’t listed as a starter but is coming off a career-high 101 yards rushing with a touchdown in last week’s 32-24 overtime win at Gardner-Webb.

Charleston Southern: QB Jack Chambers, a senior, has passed for 2,435 yards, the fourth-best total in school history, while also leading the team with 477 yards rushing. He has passed for 17 touchdowns. He has seven TDs on the ground.

Georgia: Freshman TE Brock Bowers leads the team with 30 catches. He has scored seven touchdowns, including six receiving. He has tied Leonard Pope’s team record for receiving touchdowns in a season for a tight end set in 2004.

Charleston Southern has four players with 30 or more catches, led by WRs Geoffrey Wall (62) and Cayden Jordan (52). ... Third-year Buccaneers coach Autry Denson is 0-2 against FBS teams, including a 31-28 loss at East Carolina on Sept. 25. Chambers passed for a career-high 405 yards against ECU. ... Georgia had six players score touchdowns in a 55-9 win over Charleston Southern in 2014 in the teams’ only previous meeting. ... Georgia is 10-0 for the first time since 1982, also the last year it was unbeaten in the SEC. ... The Bulldogs are No. 1 in the AP Top 25 for the sixth consecutive week, it’s longest stretch since its 1980 national championship. ... Georgia leads the nation in scoring defense (7.8). ... The Bulldogs have outscored opponents 323-36 in the first three quarters.