No. 11 Oregon tries to shut down Washington State 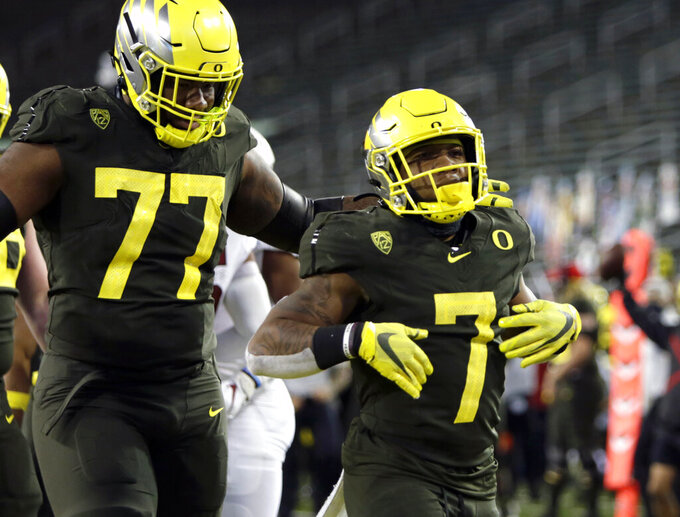 Oregon has won 17 of its past 18 Pac-12 games, including a 35-14 win over Stanford last Saturday, and wants to keep its hopes for the Pac-12 North title alive. Washington State wants to prove its 38-28 win at Oregon State last weekend was no fluke, even though the Cougars were missing more than 30 players, including their top running back Max Borghi.

Oregon quarterback Tyler Shough, who took over this season after the departure of Justin Herbert to the NFL, against Washington State's defense that gave up just seven points in the first half to the Beavers. “They really played together," WSU coach Nick Rolovich said of his defense. ”They believed." Shough is a dual threat who rushed for 85 yards against Stanford.

Oregon: CJ Verdell is the Pac-12′s top returning running back with 1,220 rushing yards last season. Verdell had 20 carries for 105 yards against Stanford. He pounded WSU for 257 rushing yards, more than 300 all-purpose yards, and three touchdowns a year ago.

Washington State: RB Deon McIntosh, filling in for injured Borghi, had 18 carries for 147 yards. Freshman QB Jayden de Laura, the first true freshman to start a season opener in program history, completed 18-of-33 passes for 227 yards and two touchdowns. He also rushed for 43 yards and a touchdown and was named Pac-12 freshman of the week.

Rolovich said it was unclear if Borghi, one of the nation's top running backs, would return from injury Saturday. ... Oregon will be without starting safety Verone McKinley during the first half, after McKinley was called for targeting against Stanford. ... Washington State reported one case of COVID-19 among football players this week. ... Rolovich is the first Cougar head coach to win his debut on the road since Warren Powers in 1977 (19-10 at No. 15 Nebraska). ... Oregon had three players that rushed for at least 78 yards in the win over Stanford.