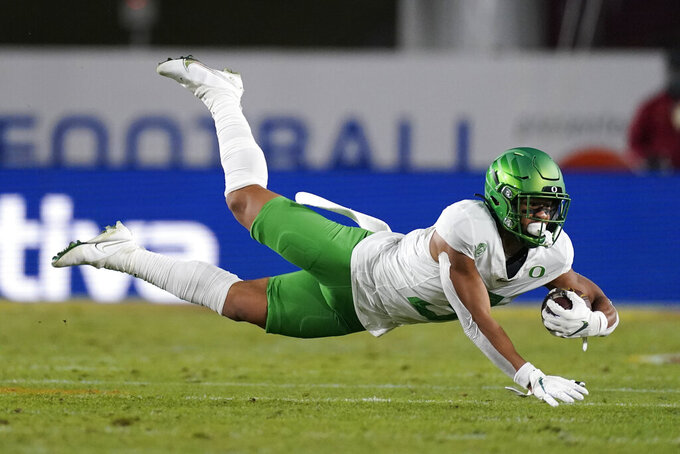 Oregon won the Pac-12 title after being a late replacement and is back in a New Year's Six bowl for the second straight season.

Two different roads to what could be another great Fiesta Bowl when No. 12 Iowa State faces No. 25 Oregon on Jan. 2.

“We certainly understand the prestige and history of the Fiesta Bowl,” Iowa State coach Matt Campbell said. “To play an opponent like Oregon and what coach (Mario) Cristobal has continued to do there and the success of the program, I can tell you our kids will be truly honored to play in this game.”

The Cyclones (8-3) dropped four spots in the College Football Playoff rankings to No. 10 after losing to No. 8 Oklahoma in the Big 12 championship game. The Ducks (4-2, No. 25 CFP) won their second straight Pac-12 championship by beating Southern California on Friday.

The Fiesta Bowl has seen some wild games through the years, including Boise State's overtime win over Oklahoma in 2007 and a combined 94 points between UCF and Baylor in 2014.

Oregon may not be as prolific offensively as in past seasons, but quarterback Tyler Shough threw for 1,480 yards and 13 touchdowns with five interceptions in six games.

Iowa State has the nation's leading rusher in Breece Hall, who had 1,436 yards and 19 touchdowns. Quarterback Brock Purdy provided balance to the offense, throwing for 2,594 yards and 18 touchdowns with nine interceptions.

“They're an excellent, talented, well-coached football team that schematically runs more than a couple things that are very different than what we've seen,” Cristobal said.

Iowa State got the 2020 season off to a disappointing start with a home loss to Louisiana, but won seven of its next eight games before the Big 12 title game.

The Cyclones lost 27-21 to the Sooners, but will be playing in a January bowl for the first time.

“From our standpoint, this has been a really special season for our program as we continue to grow over the last couple years,” Campbell said. “We’ve got a great senior class made up of 60 seniors that have really stayed the course in this program and really led us every step of the way.”

Oregon (4-2) replaced Washington in the Pac-12 championship game after the Huskies had to pull out due to COVID-19 issues.

The Ducks, who finished second in the Pac-12 North, made the most of the opportunity, beating USC 31-24 for their second straight conference title. They did it despite originally being scheduled to play Colorado.

The win earned Oregon the Pac-12's automatic bid to a New Year's Six bowl and got the Ducks back into the AP Top 25 at No. 25.

The Ducks got the Pac-12's conference-only season off to a strong start, scoring at least 35 points in wins over Stanford, Washington State and UCLA.

Oregon moved up to No. 9 in the AP Top 25 and had longshot hopes of earning a spot in the College Football Playoff. The playoff bid ended with a disappointing 41-38 loss to rival Oregon State and the Ducks' next game, against Washington, was canceled due to positive coronavirus tests in the Huskies' program.

“When you say Oregon football, you have an immediate respect for who they are and what they're about,” Campbell said.

The two starting quarterbacks will be returning home.

Purdy, a junior, played at at Perry High School in Gilbert, about 45 miles southeast of State Farm Stadium. He was named the Gatorade Arizona Player of the Year in 2017 while setting state 6A records with 4,405 yards and 57 TDs.

Shough, a sophomore, played at Hamilton High School in Chandler, which is next to Gilbert. He was the No. 1 Arizona recruit in the 247Sports composite and threw for 3,071 yards and 30 TDs as a senior.

“Certainly a competitive situation at the high school level and now they get to do it at the collegiate level,” Cristobal said.

CJ Verdell was Oregon's leading rusher heading into the Pac-12 title game despite being limited the previous two games due to a knee injury. He wasn't able to play against USC, but the two weeks between games could give him and several other injured players time to heal enough to play.

“I feel very hopeful we'll have several guys back,” Cristobal said. “Hopefully, we'll have good news as we go along.”

Verdell ran for 285 yards and had three TDs in five games.