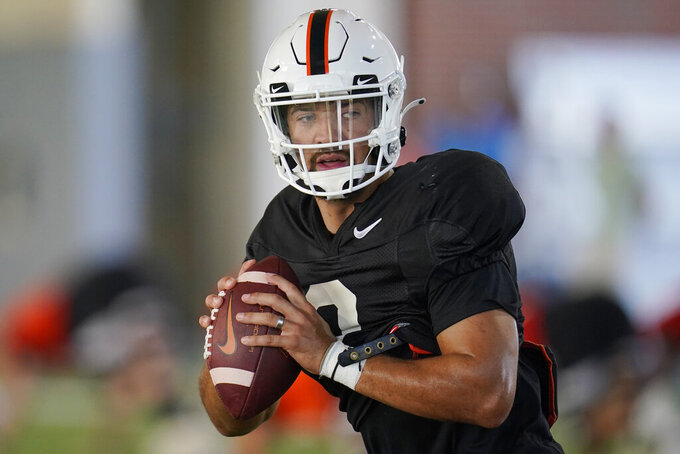 Line: Oklahoma State by 22½, according to FanDuel Sportsbook.

Oklahoma State reached the Big 12 championship game last season and beat Notre Dame in the Fiesta Bowl. The Cowboys believe they can accomplish at least that much this season, with veteran quarterback Spencer Sanders leading the way. But they can't afford to slip early, and coach Mike Gundy remembers an upset loss to Central Michigan in 2016 that provided an unexpected blemish on a 10-3 season.

Central Michigan: RB Lew Nichols III. He led the nation with 1,848 yards rushing last season and was the Mid-American Conference Offensive Player of the Year. He's a bruiser at 222 pounds — an old-school workhorse who carried 341 times last season.

Gundy seeks his 150th career win. He is 15-2 in season openers. ... Oklahoma State defensive end Trace Ford is back after missing last season with a torn ACL. ... Central Michigan closed last season with five straight wins. ... QB Gunnar Gundy — Mike Gundy's son — is tied for No. 2 on the depth chart. Mike Gundy played QB for Oklahoma State in the 1980s. ... Central Michigan coach Jim McElwain was hospitalized after suffering a seizure in July, but he has since recovered.

By Ralph D. Russo 39 minutes ago
an hour ago
By Eric Olson 3 hrs ago
By Mark Long 3 hrs ago
3 hrs ago