No. 13 Kentucky aims for SEC rebound against South Carolina 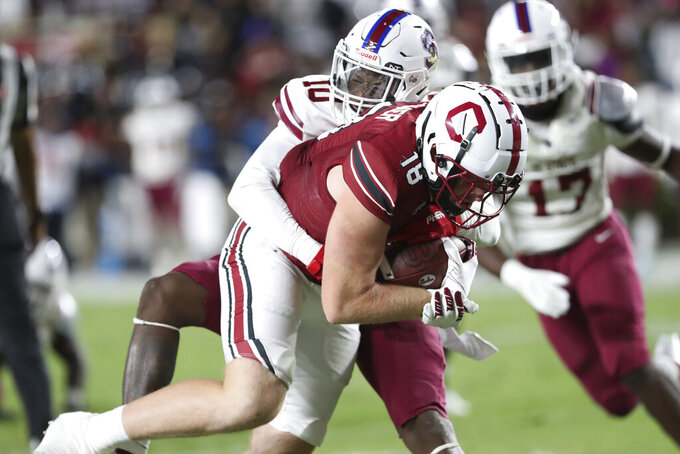 LEXINGTON, Ky. (AP) — Kentucky coach Mark Stoops is sticking with the game plan and the quarterback who runs it.

Will Levis and the No. 13 Wildcats just need to ensure golden opportunities don't slip from their grasp like last week.

Most important for Kentucky (4-1, 1-1 SEC) against South Carolina (3-2, 0-2) on Saturday night is forgetting numerous missed chances in a 22-19 loss at No. 9 Mississippi. Failing on two conversions and a field goal were tough enough to digest from the close defeat; Levis' two late fumbles inside the 20 merely added more what-ifs.

With the Gamecocks hungry for their first SEC win, the Wildcats have no room for self-pity or errors.

“Win or lose, we have to put it behind us, and I felt like the team did a good job," Stoops said. “We’re physically in a spot where we’re banged up more than we are mentally. It is what it is. It’s a tough grind. Whether you win or lose, you have to be prepared and get ready for the next opponent. I felt like our team handled it good on Monday and Tuesday and we’ll get back at it.”

Kentucky can take heart in having that many opportunities to win an SEC road game. Getting rusher Chris Rodriguez Jr. back from a four-game suspension was another upside, as he rushed 19 times for 72 yards and a touchdown. Levis was sacked three times but still completed 18 of 24 passes for 220 yards with two TDs and positioned his team for a win late before the turnovers — none of which diminished his standing with Stoops.

“I wouldn’t trade him for anybody,” the coach added.

Kentucky seeks its third consecutive series win against the rested Gamecocks, whose 50-10 rout of FCS teamSouth Carolina State on Sept. 29 was moved up two days to avoid Hurricane Ian.

South Carolina has won two straight but will face its third ranked SEC foe this season. The Gamecocks hope for a better outcome this time after losing 44-30 to then-No. 16 Arkansas and getting thumped 48-7 by Georgia, No. 1 at the time.

“We've got to go in there knowing everybody’s against you," quarterback Spencer Rattler said. "Go out there and just play at a high level, your best level in all three phases. Our best players just got to play great.”

The senior runner reminded Kentucky how much more dynamic the offense is with him carrying the ball. He has rushed 46 times for 348 yards and four TDs in three previous games against South Carolina. Stoops wouldn’t say how much Rodriguez would work but was encouraged by his durability in the return.

South Carolina coach Shane Beamer doesn’t have to think too hard about where he was when the Gamecocks last played at Kentucky in 2020: awaiting a phone call from AD Ray Tanner about Beamer becoming the next football coach. Beamer was part of Lincoln Riley’s staff at Oklahoma in December 2020 when he was isolated at home with COVID-19. An anxious Beamer watched most of Kentucky’s 41-18 win at home with the phone in his hand awaiting the call, which finally came. Beamer was named coach the next day.

“I remember that night well for sure,” Beamer said with a grin. “That was a pretty cool phone call I got from coach Tanner and the rest is history.”

The kicking-game issues that cost Kentucky five points at Ole Miss are a concern that Stoops vowed to correct. But the Wildcats’ return game has become a weapon thanks to freshman Barion Brown, who returned three kickoffs for 164 yards against the Rebels and accounted for 245 overall. He’s averaging nearly 48 yards on six returns, one of which was a 100-yard TD in the opener against Miami (Ohio). He shared this week’s SEC top freshman honors.

Beamer got in from work Monday night and watched a show near and dear to his heart: “ACC Legends: Frank Beamer.” The ACC Network aired the special to celebrate Beamer’s dad's stellar career as Virginia Tech coach. The younger Beamer, in his second year at South Carolina, took part in the show and was happy to see his father honored.

“It made me really, really proud as a son,” he said.

One of Shane Beamer’s favorite parts? When it showed him as an eighth-grader carrying headphone cords on the sidelines.