No. 18 Arizona State looks to stay atop Pac-12 South vs Utah 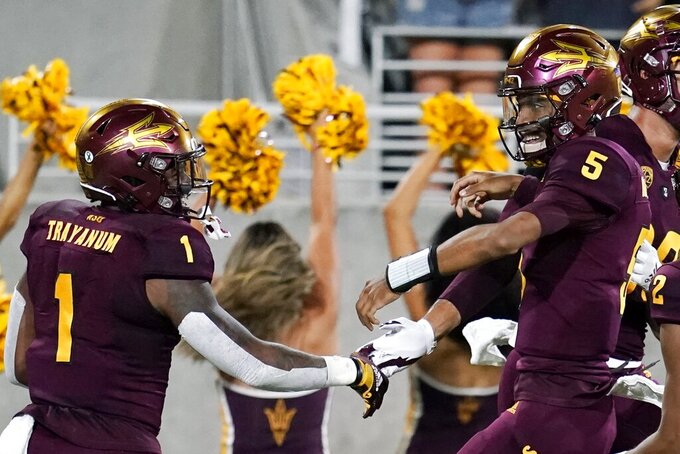 Line: Utah by 1/2, according to FanDuel Sportsbook.

Arizona State can solidify its hold on first place in the Pac-12 South with a win over Utah. The Sun Devils have opened league play with wins over Colorado, UCLA, and Stanford while allowing 351.3 yards and 15.3 points per game. The Utes have bounced back from a 1-2 start with back-to-back wins over Washington State and USC. Utah’s offense has shown a resurgence since making a change at quarterback.

Arizona State's defense vs. Utah QB Cameron Rising. Since taking over at quarterback, Rising has given the Utes a major boost on offense with his mobility and dynamic playmaking ability. He’s 2-0 as a starter and has tallied 502 yards of total offense and four touchdowns in those games. The Sun Devils lead the Pac-12 in many defensive categories, ranking first in scoring defense (16.2 points per game), total defense (299.0 ypg), sacks (21.0), and tackles-for-loss (43.0). Only one team has totaled more than 400 yards against Arizona State this season.

Arizona State: QB Jayden Daniels had a forgettable outing the last time he faced Utah. Daniels totaled a career-low 25 yards on 4-of-18 passing in a 21-3 loss in 2019. He is off to a strong start this season. Daniels has eclipsed 200 yards passing in three of his six starts and he is completing a Pac-12 best 70.1% of his passes through six games.

Arizona State has outscored opponents 92-26 in the second half and 47-9 in the fourth quarter this season. … The Sun Devils have forced 44 turnovers over their last 17 games dating to 2019, the most in the nation over a 17-game span. … The Utes have had a 100-yard rusher in four of five games this season, coming from three different players. … Arizona State is one of three FBS teams who have not allowed a play covering more than 40 yards this season. … Daniels needs only 53 yards to reach 1,000 career rushing yards. … Utah leads the Pac-12 in tackles for loss per game (7.8).