No. 18 Wisconsin eager for opener: 'It feels like Christmas' 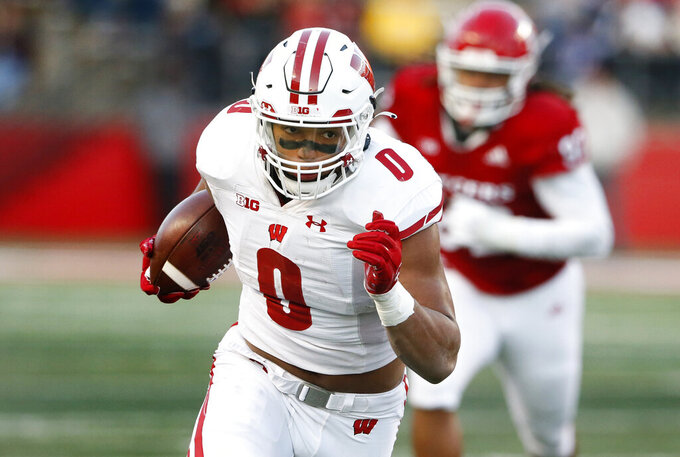 FILE - Wisconsin running back Braelon Allen (0) rushes against Rutgers during the second half of an NCAA college football game Saturday, Nov. 6, 2021, in Piscataway, N.J. Allen is a top contender for the 2022 Doak Walker Award. (AP Photo/Noah K. Murray, File)

MADISON, Wis. (AP) — Wisconsin has a new guy running the offense and new faces all over the defense as the Badgers attempt to avoid a repeat of last season’s September struggles.

The 18th-ranked Badgers’ season opener against Illinois State on Saturday marks the debut of former Baltimore Ravens tight ends coach Bobby Engram as offensive coordinator. Wisconsin may need more production from its offense early on because the Badgers must replace eight of their top 10 tacklers from last season.

Outside linebacker Nick Herbig can’t wait to see what happens.

“Man, it feels like Christmas,” said Herbig, the top returning tackler from a defense that allowed the fewest yards per game and yards per play of any team last season.

Wisconsin wants to avoid a repeat of last season, when the Badgers lost three of their first four games before recovering to win eight of their last nine. The Badgers have a different kind of season opener this time around.

Rather than opening against Big Ten rival Penn State, the Badgers are facing a Football Championship Subdivision foe. The Badgers insist that won’t alter their approach.

Illinois State is playing a Big Ten team for the first time since 2016, when the Missouri Valley Conference program defeated Northwestern 9-7 on a field goal as time expired.

The Redbirds reached the FCS quarterfinals as recently as 2019 but are coming off a 4-7 season.

“I think we have really good leadership,” said Illinois State coach Brock Spack, who is entering his 14th season. “This team’s much better that way than it was a year ago. Our passing game’s improved.”

Wisconsin’s Braelon Allen is back after rushing for 1,268 yards and 12 touchdowns as a 17-year-old freshman last season. He leads a backfield that also features Chez Mellusi and Isaac Guerendo, who are healthy again after injuries ended their 2021 seasons prematurely.

Engram arrives at Wisconsin after spending eight seasons as an assistant with the Baltimore Ravens, the last three as tight ends coach. He had worked on Chryst’s staff at Pittsburgh from 2012-13 as wide receivers coach.

Engram says he will be working from the booth on Saturday.

WHO’S NEXT AT QB

If Wisconsin puts this game out of reach in the second half, it will be interesting to see which player steps in for starting quarterback Graham Mertz.

Projected backup Chase Wolf is out indefinitely with an injured right leg. None of the Badgers’ other quarterbacks - Deacon Hill, Myles Burkett and Marshall Howe – has taken a snap in a college game.

Chryst and Engram haven’t said which player would serve as Mertz’s main backup.

Wisconsin has a new look and new coach on the offensive line.

Jack Nelson has moved from right guard to left tackle. Tyler Beach has shifted from left tackle to left guard. The new right guard is Michael Furtney. The starting right tackle is Riley Mahlman, who appeared in just one game as a freshman last season.