No. 2 Cincinnati travels to Navy with highest ranking ever 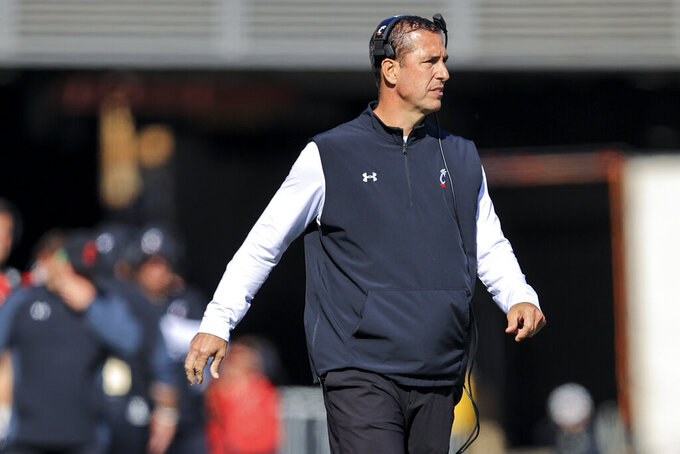 Cincinnati head coach Luke Fickell stands on the field during the second half of an NCAA college football game against UCF, Saturday, Oct. 16, 2021, in Cincinnati. Cincinnati won 56-21. (AP Photo/Aaron Doster)

Cincinnati has its highest AP ranking ever, although the big question is what the playoff committee will do with the Bearcats if they stay undefeated. Navy is facing a top-five opponent at home for the first time since 1984.

Navy's running game vs. Cincinnati's defensive front. The Bearcats are heavily favored for a reason, but the Midshipmen are a tricky team to prepare for and Cincinnati doesn't want to let Navy hang around with clock-draining drives. The Midshipmen did keep it close against a nationally ranked SMU team earlier this season.

Cincinnati: RB Jerome Ford ran for 179 yards and four TDs in a 56-21 win over Central Florida last weekend. Although Navy's option-based offense is unusual and can cause problems for opponents, there's little indication that the Midshipmen can slow Cincinnati's offense.

Navy: LB Diego Fagot leads the Midshipmen in tackles and tackles for loss. He returned an interception for a touchdown in last week's loss to Memphis, but it was called back because of a penalty.

The last top-five team to play at Navy was No. 2 South Carolina in 1984, and the Midshipmen won the game 38-21. ... Cincinnati has scored 50 points in back-to-back games for the first time. The Bearcats beat Temple 52-3 before their win over UCF. ... Navy also beat UCF 34-30 for its only win so far. ... Cincinnati QB Desmond Ridder has a 37-5 career record. ... The Bearcats are allowing opposing quarterbacks to complete only 49% of their passes, although passing isn't usually a big priority for Navy.