No. 2 Clemson, No. 3 Notre Dame in playoff after QB switches 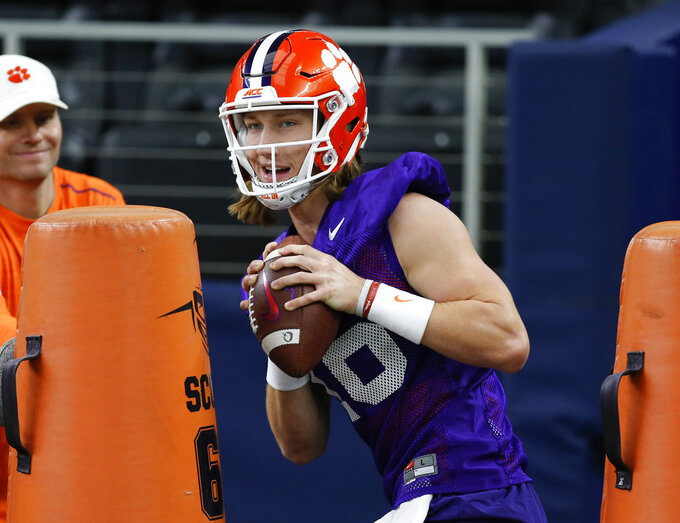 DALLAS (AP) — Clemson and Notre Dame weren't even a month into this season when they made unexpected quarterback switches while undefeated with seniors who had won a lot of games.

Neither of those senior starters was even injured, but the Tigers and Fighting Irish decided to make early changes. Both teams are still without a loss and now in the College Football Playoff.

Trevor Lawrence was named Clemson's new starter going into the Sept. 29 game against Syracuse after the true freshman had played behind Kelly Bryant each of the first four games. That was a week after Ian Book supplanted Brandon Wimbush as Notre Dame's No. 1 quarterback .

"I knew what my goals were and I knew I wanted to play for a championship, but I wasn't really sure how everything would work out," Lawrence said. "I didn't have a plan as far as how the season would go exactly, so I didn't really I guess have too many expectations on how we'd get here necessarily. It's definitely been a crazy year."

Bryant, who plans to finish his college career at Missouri, almost immediately left Clemson's program to save his final season of eligibility after going 16-2 as a starter and helping lead the Tigers to their third consecutive ACC title last year. Lawrence, the AP's ACC top newcomer, made it four in a row this season.

Notre Dame was 3-0 when Book, the junior who led a late comeback victory in last season's Citrus Bowl against LSU, took over after Wimbush had gone 12-3 in his starts.

"Both of us are very fortunate, couldn't be in a better situation. And the season goes by so fast," Book said Wednesday. "There's certain times where you kind of just sit back and realize where you are and how fast this whole season has gone by, and again, just how fortunate we are to both be here and playing in such a big game."

Lawrence and Book go head-to-head Saturday in the Cotton Bowl. The winner of the semifinal matchup between second-ranked Clemson (13-0) and third-ranked Notre Dame (12-0) advances to play No. 1 Alabama or No. 4 Oklahoma for the national title.

Wimbush is still with the Irish prepping for the playoff. But several media reports say Wimbush, who already has a degree and can go play immediately at another school as a graduate transfer, has notified Notre Dame that he intends to transfer after the season.

Right after Lawrence was named Clemson's starter, in a switch that could have potentially created a divide among the team, All-America senior defensive tackle Christian Wilkins took the young 6-foot-6 quarterback to breakfast.

"I just felt like it was something that needed to be done, me setting the tone, I'm behind you, I got your back," Wilkins said. "If I'm a guy who is pretty well respected on the team and I can do this for a young guy who's going to be in the lead, taking charge of the program, then everybody else should follow suit essentially."

Lawrence has 2,606 yards passing with 24 touchdowns and four interceptions. He had 600 yards and nine TDs before even starting a game.

Coach Dabo Swinney would like to see Lawrence keep being more aggressive with his legs — he has 76 of his 144 rushing yards in the last three games.

"I was pretty confident in where he was mentally and obviously his ability to throw the football and all of that stuff but we need him to get more comfortable scrambling," Swinney said. "He's sometime too confident in his arm."

Before splitting reps with Bryant this season, Lawrence was an early enrollee at Clemson and went through spring practice when five-star quarterback Hunter Johnson was still there before transferring to Northwestern.

"He works harder than anyone else on the team" offensive tackle Mitch Hyatt said. "He's always studying film, always studying something. It's fun to see him mature. When he got that starting job ... he just took it upon himself to go work even harder."

Book has thrown for 2,468 yards with 19 touchdowns and six interceptions for Notre Dame, which has averaged 35 points a game in his eight starts — a touchdown more than four games started by Wimbush. The accurate junior has completed 197 of 280 passes (70 percent).

"We've just been able to open the playbook and he's been able to make all the throws," said Irish leading receiver Miles Boykin, who had the go-ahead 55-yard TD catch from Book with 1:28 left in the Citrus Bowl. "He's extremely accurate. ... Having a quarterback like that, you know he's going to place the ball where only you can get it. The rest is left up to us to go and make the play."

By Ralph D. Russo 38 minutes ago
By Pat Graham 3 hrs ago
By Tanner Marlar 8 hrs ago
By Steve Reed 9 hrs ago
By Michael Marot 10 hrs ago