No. 20 Cincinnati puts 6-game winning streak on line at UCF 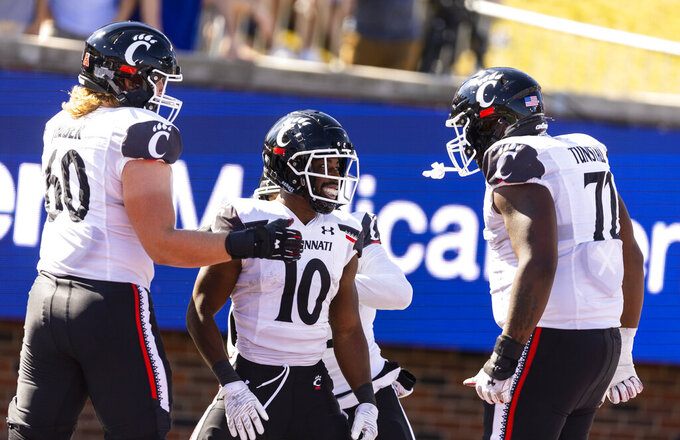 Cincinnati running back Charles McClelland (10) is congratulated by offensive linemen Joe Huber (60) and James Tunstall (72) after scoring a touchdown during the first half of an NCAA college football game against SMU, Saturday, Oct. 22, 2022, in Dallas. (AP Photo/Brandon Wade)

Line: UCF by 1 ½, according to FanDuel Sportsbook.

Cincinnati: QB Ben Bryant has thrown for 1,761 yards, 15 TDs and six interceptions. RB Charles McClelland is coming off rushing for 129 yards and a TD in last week’s 29-27 victory over SMU.

Cincinnati has won six straight since losing its season opener at Arkansas. ... UCF had won four straight before losing last week. The Knights are 6-0 in conference home games under coach Gus Malzahn. ... The Bearcats have won three straight in the series, including 56-21 at Cincinnati in 2021 and 36-33 in Orlando two years ago. ... Cincinnati’s has scored a nation-leading four touchdowns on defense. LB Ivan Pace, Jr. is tied for first with seven sacks and leads the country with 14½ tackles for loss. ... The Bearcats and Knights have won four of the past five AAC titles, with UCF claiming consecutive championships in 2017 and 2018 and Cincinnati winning in 2020 and 2021.