No. 20 Ole Miss goes for 3 in row against Mississippi State 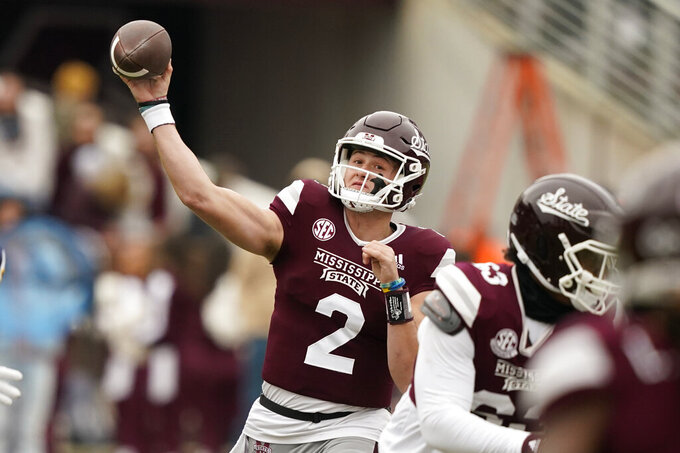 Lane Kiffin normally isn't one to mince words, but his description of the Egg Bowl is definitely on the diplomatic side.

Kiffin and No. 20 Mississippi (8-3, 4-3 Southeastern Conference) will seek their third straight win over Mississippi State (7-4, 3-4) on Thursday in a rivalry that's not always polite. To put it diplomatically.

“It seems like there's not a lot of love in the relationship, I guess” Kiffin said. “That's a nice way of putting it But it means a lot to a lot of people.”

It's Round 3 for Kiffin vs. Mike Leach, who have both upgraded flagging programs in the Magnolia State. In this case, it's Quinshon Judkins and the nation's No. 3 rushing team (Ole Miss) against Will Rogers and the ninth-rated passing offense.

Both styles have produced plenty of yards but late-season slumps impacted both teams. Ole Miss has dropped three of four, with losses to top 10 teams LSU and Alabama but also to Arkansas.

The Bulldogs got back on track from their own 1-3 stretch with a 56-7 victory over East Tennessee State.

The Bulldogs now aim to halt their recent struggles against Ole Miss. For Leach, that means slowing down Ole Miss quarterback Jaxson Dart and Judkins. And then making sure his Air Raid scheme hits its marks.

“Just play fast,” Leach said. “We’ve got to play fast, and we do some of that ourselves. The key with them is their quarterback and how quickly he can transition without being affected. The more you can frustrate that, the better off you are.”

And the more you beat your rival, the happier your fans and team are.

“You can see the hate on the field," Ole Miss wide receiver Jonathan Mingo said.

Kiffin has repeatedly dodged questions about the Auburn coaching opening. He did fire back on Twitter at a TV reporter who reported Monday that Kiffin would step down on Friday but hadn’t been offered the job. In one response, he said “that’s news to me.”

“I’ve been here three years and been fortunate enough to have three different contracts,” Kiffin said earlier that day. “I don’t know why a fourth contract all of a sudden makes people feel better.

Judkins and Zach Evans have a shot at giving Ole Miss two 1,000-yard rushers in a season for the first time. Judkins leads the SEC with 1,385 yards and a school single-season record 16 touchdowns. Evans’ 899 rushing yards ranks fifth. Both topped 200 yards against Arkansas.

Bulldogs cornerback Emmanuel Forbes again demonstrated the hazard of a quarterback throwing his way. He had his third pick-six this season and FBS-record sixth in his career last weekend. He leads FBS with six interceptions and is tied for eighth with 14 passes defended.

Mingo would prefer not to even count the Bulldogs' last Egg Bowl win. Mississippi State escaped with a 21-20 victory in 2019 after Ole Miss receiver Elijah Moore was penalized for celebrating a touchdown by crawling and pretending to urinate like a dog. Ole Miss missed the extra point attempt after it was pushed back 15 yards.