No. 22 Cincinnati tries to stay alive in American race 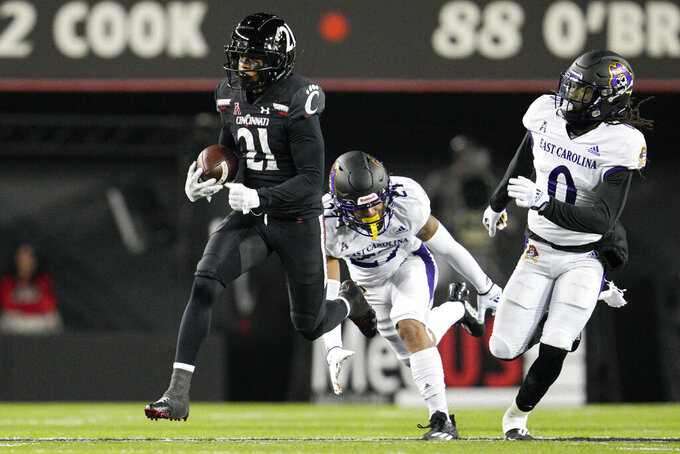 Cincinnati wide receiver Tyler Scott (21) runs for a touchdown during the first half of an NCAA college football game against East Carolina, Friday, Nov. 11, 2022, in Cincinnati. (AP Photo/Jeff Dean)

Cincinnati can remain in the hunt for the American Athletic Conference conference championship game berth with a victory. The Bearcats, who became the first non-Power 5 team to advance to the College Football Playoff last year, are tied for the lead in the American standings with Central Florida and Tulane, all at 5-1. The Bearcats host Tulane next weekend in their regular-season finale.

The cornerstone of the Cincinnati defense is senior linebacker Ivan Pace Jr., who leads the AAC with nine sacks and 19 tackles for loss in 10 games. Pace could have a huge defensive game against a Temple offensive line that has used 10 different starting lineups due to injury. Temple's left tackle, Issac Moore, is the only player to have played in every game.

Cincinnati: Junior WR Tyler Scott has four 100-yard games, including a combined 17 catches for 279 yards and three touchdowns in wins over Navy and East Carolina the last two games.

Temple has an 8-3 advantage in the series in home games, including a 24-17 win in 2018 that ended Cincinnati's run at an undefeated season. ... Cincinnati won last year's matchup, 52-3. ... Temple has averaged just 90.6 yards in rushing. ... Cincinnati quarterback Ben Bryant has thrown for over 300 yards in three of his last four games. He has also thrown an interception in three of the last four games. ... Jaden Thompson had 157 all-purpose yards last week, including a 100-yard kickoff return for a touchdown. ... Cincinnati ranks second in the nation in net punting (46.5 yards).