No. 23 Arizona State tries to continue momentum vs. UNLV 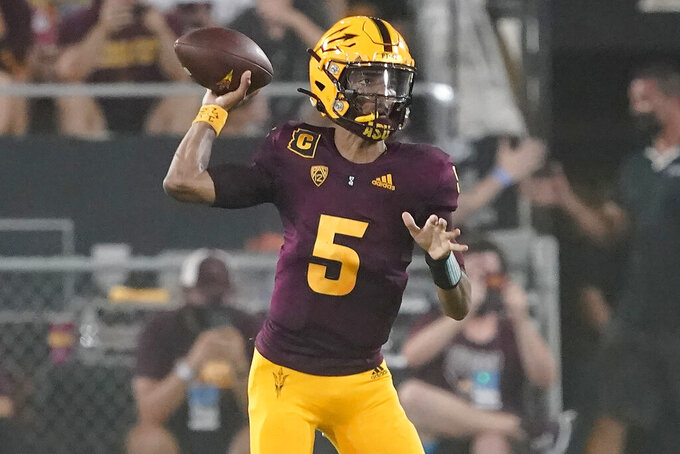 Line: Arizona State by 34 ½, according to FanDuel Sportsbook.

Arizona State tries to continue a steady buildup of success going into Pac-12 play in two weeks. The Sun Devils easily handled Southern Utah 41-14 last weekend and a similar score is expected against UNLV, according to oddsmakers. UNLV is trying to bounce back after a 35-33 double-overtime loss to Eastern Washington, which plays at the FCS level. The Rebels are trying to win their first game since 2019 after going 0-6 in the pandemic-shortened 2020 season.

Arizona State QB Jayden Daniels didn't need to throw much against Southern Utah, finishing 10 of 12 for 132 yards before leaving in the third quarter with leg cramps. He also ran for 40 yards on carries. Trying to slow down Daniels will be a tall order for UNLV's defense. Daniels was one of the nation's top freshman in 2019, throwing for 2,943 yards, with 17 touchdowns and two interceptions.

UNLV: RB Charles Williams is one of the nation's most accomplished backs, running for 3,117 yards and 21 touchdowns over the past six seasons. He ran for 177 yards and two touchdowns in last week's loss. The Sun Devils were occasionally sloppy in their win against Southern Utah and Williams has the ability to make Arizona State pay for mistakes if they happen again.

Arizona State: LB Darien Butler had a great start to the season against Southern Utah with two interceptions. They were the first two interceptions of his career. The senior is one of the most experienced players on the defense, playing a big role since he stepped on campus in 2018.

Arizona State was penalized 13 times for 135 yards against Southern Utah with most of those mistakes coming in the first half. ... The Sun Devils have forced 38 turnovers over the past 12 games dating to 2019. That's the most in the nation. ... Daniels has just five turnovers in 657 total plays in his career. ... UNLV has a 5-42 all-time record against nationally-ranked teams. The Rebels are 6-31 all time against members of the current Pac-12.