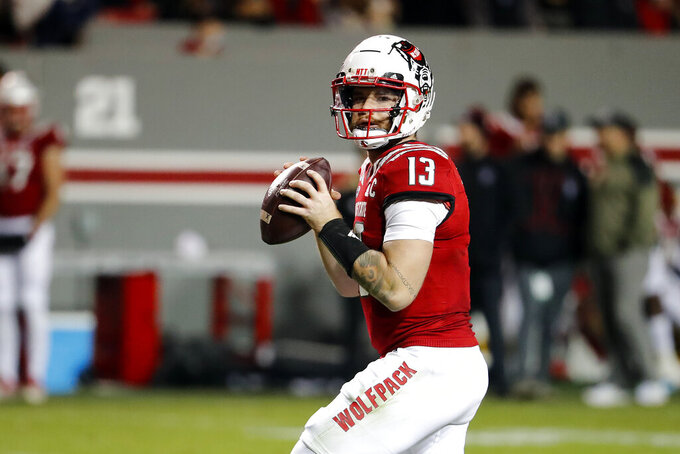 North Carolina State quarterback Devin Leary (13) looks to throw the ball against Syracuse during the second half of an NCAA college football game in Raleigh, N.C., Saturday, Nov. 20, 2021. (AP Photo/Karl B DeBlaker)

The Wolfpack can still win the ACC's Atlantic Division with a victory and a Boston College victory against No. 21 Wake Forest on Saturday. The Tar Heels are seeking a three-game winning streak in the series for the first time since 2004-06.

Tar Heels WR Josh Downs against the N.C. State defense. Downs leads the ACC with an average of more than eight catches, is second with an average of almost 109 receiving yards and has caught eight touchdown passes. For the Wolfpack defense to remain stingy, they'll have to hold Downs in check.

North Carolina: QB Sam Howell. He hasn't had the monster season throwing the ball that many expected, but is third in the league with an average of 343 yards per game in large part because of 726 rushing yards, second among ACC QBs.

N.C. State: QB Devin Leary. He leads all ACC QBs in touchdown passes against ACC competition with 23 and had a streak of 228 passes without being intercepted earlier in the year. During that stretch, he threw 20 touchdown passes.

UNC coach Mack Brown is 7-7 in his career against N.C. State. The Wolfpack's Dave Doeren is 4-4 against the Tar Heels. ... Brown has won 23 of his last 24 games against in-state ACC rivals. ... The visiting team has won six of the last eight meetings. ... UNC and Louisville are the only ACC teams averaging 200 yards passing and rushing. ... The Wolfpack is seeking its first unbeaten season at home since 1986. ... N.C. State has outscored its opponents 220-85 at home this season. ... The Wolfpack ranks 13th in the FBS in scoring defense, 17th in rushing defense, 17th in total defense, and sixth in third-down conversion defense.